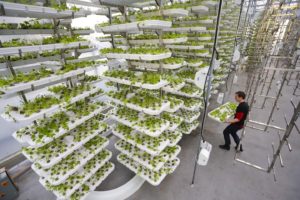 In many respects, agriculture has long been a leader in adopting new technology. This might surprise some people, but it makes sense. Consider that in 1900, more than 40 percent of the American workforce was directly involved agriculture. Today it’s less than 2 percent. It took a great deal of technology to reduce the number of people it takes to feed the country so drastically in such a (relatively) short amount time.

Given how much has changed in the last century, what are some unexpected technologies that will drive the next transformational change in this critical industry? Here are three trends to monitor.

Growing Up and Out: Vertical Garden and Indoor Agriculture

Today most of the produce purchased at the grocery store was shipped from thousands of miles away, and may be months old. In fact, it’s estimated that the average American meal travels about 1500 miles to get from farm to plate.

What if we could grow all the produce we need, in the same cities where it will be eaten, maybe even in the same neighborhood? Thanks to a variety of fast-advancing technologies, now we can. Startups around the world are developing new indoor gardens that leverage affordable LED lights and advanced water and nutrient management systems to grow a wide range of produce indoors, close to the consumers. While indoor agriculture and “Vertical Gardens” have been around for years, they are now beginning to gain momentum. To this point, just a few weeks ago, the San Francisco-based startup Plenty announced that it had raised $200m USD from high-profile investors including Eric Schmidt and Jeff Bezos. Their vertical gardens–kind of like a living wall–can produce up to 350 times more per square foot than traditional farms.

What if there were a meatless “hamburger” that was a healthier, better tasting alternative than meat? After years of incremental improvements, we may finally be reaching the tipping point of flavor, texture, price, and availability for animal-free “meat.” In fact, just last month it was announced that Beyond Meat’s burger patties will now be stocked next to real meat in 600 locations–a momentous step for a product that has historically been relegated to the vegan or alternative food aisles. High-end restaurants such as Momofuku Nishi in New York have begun serving faux burgers, and even more affordable chains such as BurgerFi are doing test runs to gauge consumer response.

New meat-like veggie-based burgers aren’t the only new option. Last March, Memphis Meats announced that it created the “world’s first chicken strip from animal cells,” which use real animal cells without harming the animal. The process is still expensive, but like so many other technologies, the process of growing animal cells into consumable products will continue to improve and become less expensive.

What does this mean for the nation’s beef industry? At this point, not much. “Cultured” meats and vegetable-based alternatives account for only a tiny fraction of overall “protein” sales. But it’s important to recognize the potential future impacts of this emerging trend and to begin considering the possibilities. What if even 10 percent of meat consumption is offset by consumers moving to more environmentally conscious and healthier meat alternatives?

Traceability, Transparency and Trust: The Blockchain

First introduced in a paper published online in 2008, blockchain–or shared digital ledger technologies–have come a long way. Earlier this year, digital currencies such as Bitcoin collectively exceeded $100 billion USD in value. That’s an astonishing number for a concept introduced less than a decade ago! Big banks and other financial institutions around the world are announcing new blockchain-based projects almost weekly now. Other than payments, how could the blockchain impact the agriculture industry?

Walmart provides an early example of some future possibilities. At their annual investor meeting last month, they announced great results with their blockchain experiments, including tracking Chinese pork along the supply chain. The company stated, “This will help enable precise and rapid recalls to preserve consumer trust in the food industry, while increasing traceability and transparency of the food system.” As with many other technologies on this list, we’re still in the early days of using cutting-edge blockchain applications in agriculture, but the signs are already there that it will have a major impact, making our food supply much safer and lowering costs for both consumer and producers.

These three trends are only a few of the potential disruptors beginning to have an impact on agriculture, and in the future there will certainly be more unexpected technologies and trends that will emerge. What’s important to remember for leaders in agriculture is that even the near future may look very different than today’s world, and it’s important to pay attention to what’s driving these changes and think about the opportunities these changes could create – before they become challenges!

Jack Uldrich is a global futurist, keynote speaker and the author of 11 books. Simon J. Anderson is a futurist keynote speaker and founder Venture Foresight, a company that helps leaders be more future-resilient. They are co-authors of the award-winning book, Foresight 2020: A Futurist Explores the Trends Transforming Tomorrow.