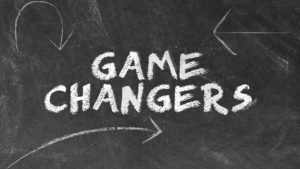 As a professional futurist, I don’t claim to predict the future. However, the two things I’m confident in stating are: 1) Today is the slowest rate of change we will ever experience again; and 2) the greatest change today is the rate of change. The world is accelerating and it’s imperative that business leaders spend more time scanning the horizon and looking around the next corner. If they do, they will come to appreciate that the time to begin preparing for a radically different future is now! Below is my annual list of “game-changing” technologies poised to transform the world in the near future.

Robot Scientists: Kebotix, a private startup based in Cambridge, Massachusetts, is using artificial intelligence and robotics to brainstorm, test, and develop novel new compounds. The technology could revolutionize materials science and lead to lighter and stronger automobiles and aircraft. The new compounds Kebotix discovers could also be used to absorb pollution, combat drug-resistant infections, and help create faster and more efficient optoelectronic components.

Generative Design: As computers get more powerful and as advances in artificial intelligence accelerate, machines are developing new skills. One of the more potent skills is generative design–the ability to simulate thousands of different options in search of the optimal design. Instead of waiting for inspiration, generative design is capable of coming up with designs no human would have imagined. General Motors and AirBus have both used generative design to develop parts that are lighter and stronger than the previous best versions. Longer-term, the technology could also lead to revolutionary building designs as well as help urban planners reconfigure neighborhoods in innovative ways.

A Global Address Book: Three hundred years ago the invention of the address system (naming streets and numbering buildings) facilitated the delivery of mail and aided commerce. Over the past few years, What3Words has created and developed a system that slices the world up into 57 trillion squares–each only measuring a mere 100 square feet. The impact of this innovative system (which cleverly uses three unique words to give every square its own address) is only now beginning to be understood. A hyper-precise global map could, among other things, allow drone deliveries to be ferried to remote locations as well as facilitate driverless cars by allowing an automobile to be summoned to your exact location.

Hybrid-electric Airplanes: A new advance in material science in combination with an innovative manufacturing trick could soon make batteries powerful enough to be used in small electric aircraft. If successful, the advances could lead to personal electric aircraft in the near-term (3-5 years), regional jets capable of flying 50-100 passengers in the mid-term (5 years), and larger jets in the long-term (10 years). If this happens, shorter urban commutes, affordable regional travel, and more fuel-efficient continental flights are all possible.

Senolytics: Senolytics are a new class of drugs that eliminate senescent cells and may slow or even reverse human aging. One company, resTORbio, has already conducted a trial with senolytics that appears to rejuvenate the immune system in people over the age of 65. Other senolytic drugs have also been tested in mice with positive effect. Soon, Rejuvenate Bio may begin experimenting with senolytics to lengthen the lives of dogs (the pet industry is a $72 billion annual business) and, longer-term, in humans. Ultimately, the company’s ambition is to give a 130-year-old person the body of a 22-year-old.

Steel-like Wood: The simple act of removing lignin from wood and then compressing the wood increases its strength–making it stronger than steel. With wooden buildings already having been constructed in Minneapolis, Portland and Vancouver–and a massive 70-story skyscraper under construction in Tokyo–the sustainable building material of the future could be growing in a forest near you.

Drugs from Dirt: A key component of your future health may be right under your feet. Earlier this year, US scientists using innovative genetic sequencing techniques discovered a new family of antibiotics in dirt. The compounds are called malacidins and they could prove effective in treating several bacterial diseases, including the superbug MRSA which is estimated to be responsible for over 11,000 deaths per year in the US.

Space Catapults: Today the items that rockets carry into outer space (satellites, astronauts, lunar probes, etc.) make up less than 5 percent of a rocket’s weight. In other words, 95 percent of the materials and fuel in a rocket are used for the purpose of lifting the other 5 percent of stuff into orbit. An innovative new kinetic energy launch system is now under development and it is designed to hurl rockets into space. If successful, the technology could revolutionize the small satellite market by lowering the cost to launches from $10 million down to $500,000. More importantly, it could usher in a new era of high-speed satellite-based wireless internet across the globe.

Plastic-eating Bacteria: An international team of scientists studying Ideonella sakaiensis, a bacterium capable of producing an enzyme that breaks down PET (the plastic used in most plastic water bottles), has made the enzyme 20 percent more effective. The improvement suggests that with additional modifications the enzyme might be able to handle full bottle-to-bottle recycling. If successful, much of the plastic that is now littering the world’s oceans, contaminating fish, and killing whales could be eliminated.

The Internet in Your Head: AlterEgo is a brain-neural prosthetic that can translate and transmit a wearer’s thoughts to the cloud. The cloud then processes and delivers information back to the user via bone vibration in the ear canal. This is a complicated way of saying that the device is like “having the internet in your head.” Developed at MIT’s Media Lab and shown earlier this year on 60 Minutes, AlterEgo is in the early stages of becoming an alternative way to access the internet.

The device is a harbinger of a brave new world and it is not too early to begin thinking about it and the other aforementioned game-changing technologies may impact the world–soon.

Jack Uldrich is global futurist, the author of the forthcoming book, The Big AHA: Business as Unusual, and a popular keynote speaker.

Interested in reviewing Futurist Jack Uldrich’s “game-changing” reports from the previous years? Checkout these past posts: