The Business of Unlearning 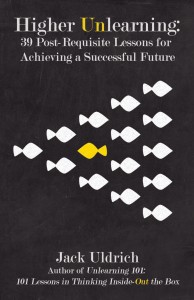 I was recently interviewed on the concept of unlearning by a reporter from The Economic Times. I understand that he’ll only end up using a sentence or two from my lengthy written responses so rather than allow all of my thoughts to languish unread on my hard drive, I thought I’d share them with you.

How do you technically differentiate between the automatic ‘learning’ that happens whenever one takes on a challenging assignment and ‘unlearning’?

Answer: Learning is an external act. You are acquiring something new. Unlearning is an internal act that requires you to release something old—be it obsolete knowledge or, more significantly, an outdated or incorrect assumption, habit or belief.

Of the two, unlearning is the more difficult. This is because in most cases people and organizations have invested substantial amounts of time and money acquiring knowledge. To be told your knowledge is no longer relevant is not a welcome development for most people. It’s like driving on a freeway and missing your exit. You need to drive to the next exit and then double back. In this way, every mile you go in the wrong direction is like a two-mile error.

The challenge is compounded because many people are emotionally invested in their old knowledge. For example, they may owe their past success to this past knowledge or their status (among their peers or the public) might rest on this old, outdated knowledge. To unlearn it is tantamount to not only admitting the world has changed but also that you were wrong.

Do C-suite managers working for large firms make bad entrepreneurs because of their ability to unlearn?

Answer: Yes. One of the most difficult things for C-suite managers to unlearn is the idea that failure is always a negative thing. In many cases, failure can lead to success. This is a counter-intuitive idea but failure is an integral component of success. It is best encapsulated by watching a child learn to walk—they must first fall down a lot before they walk, run, jump and climb. In a corporate environment, however, failure is often punished after the first setback. This is perverse because risk and initiative are absolutely essential to future success and yet many C-level managers routinely punish such acts.

Thomas Edison once said, “I have not failed. I’ve just found 10,000 ways that won’t work.” He was right. A modern example of this thinking can be found in the case study of the popular and best-selling lubricant, WD-40. The product got it’s name because it literally stands for Water Displacement 40th attempt. My guess is that most C-suite executives would have cancelled the project long before it ever got to the 39th—let alone—40th attempt.

What are the biggest mistakes made by such executives when they start their own companies?

Answer: Over-confidence. In my new book, Higher Unlearning: 39 Post-Requisite Lessons for Achieving a Successful Future, the second-to-last “unlearning” lesson is entitled “Develop a Healthy Dose of Unconfidence.” Most people—especially many entrepreneurs and most experts—think they know more they do. Unfortunately, there is a huge discrepancy between what people actually know and how much they think they know. (Alan Greenspan and is understanding of the global financial markets prior to the fall of 2008 is a perfect example).

The solution is to become more intellectually humble. Some practical strategies for would-be entrepreneurs include: Listing all the reasons your new venture might fail; studying why past entrepreneurs in related fields failed; giving more credence to individuals who disagree with you; and even actively seeking out dissenting points of view.

Do you recall any examples of executives who were too accustomed to the comforts of the corner office and thus, failed in their entrepreneurial ventures?

Answer: Bethlehem Steel. In 1989, the company was named “best-managed company in America” by a popular business magazine. Less than 15 years later the company’s manufacturing facility had been purchased by the Smithsonian Museum and was converted into the National Museum of Industrial History.

To understand how this happened, a person needs look no further than the company’s now abandoned Headquarters’ building in Bethlehem, Pennsylvania. It was purposely shaped like a crossbeam of steel to maximize the number of corner offices. (A crossbeam has 12 sides.) Unfortunately, not one of those corner-dwelling executives left his desk to understand how the company might deploy new mini-mill technology to drive new efficiencies and find new markets and new customers. If they had, it’s possible the company could have unlearned its old business model in time to prevent bankruptcy.

From a future perspective, I fear many executives in the energy and utility industries are too dismissive of how new technologies such as solid state transformers, longer-lasting grid-capable batteries, and lower cost solar cell and fuel cell technologies (among others) can similarly disrupt their industry. Before they can embrace this new future, however, they must first need to unlearn their old ways.

Is there some way to speed up, smoothen or institutionalize the unlearning process? Please share some tips.

Answer: Begin by acknowledging what you don’t know. In this era of accelerating information and knowledge it is easy to overlook the reality that our ignorance is growing even faster than our knowledge. (This is because it is impossible to stay abreast of the explosion of all new knowledge that affects any particular industry).

To combat this stark reality, I encourage people to get a reverse mentors—people who are younger and have less experience in a given field because they’ll bring fresh, new perspectives to your enterprise and they won’t carry the same old assumptions you and your peers have. I’d also encourage executives to give people on the fringe of your industry a “seat at the table” during internal discussions. Not only will this guard against “Groupthink,” these iconoclastic thinkers will also bring new technologies and new business models to your attention. Lastly, I’d encourage people not to make decisions until their know the opponents arguments better than they know your own.

All of this is hard to do for any executive. To this end, I encourage companies to designate a “chief unlearning officer.” This individual could be charge to assigning reverse mentors; making sure the “fringe” has a seat at the table; and is constantly acting as the de facto “devil’s advocate” in all internal discussions.

Interested in other business-related posts on the topic of unlearning? Check out these older ramblings:

Does Your Business Need to Unlearn?

One thought on “The Business of Unlearning”