“We are so good at seeing patterns that, often, we see them where they don’t exist.” –Michael Mauboussin

The answer is that the odds of each occurring is exactly same—1 in 16,384. And yet to most people the first outcome is viewed far differently and it is seen not as a random outcome but instead part of a clear and established pattern.

To demonstrate the point, consider one of the more statistically improbable outcomes from the world of sports: In the 14 consecutive Super Bowl’s (from 1998 to 2011) the team from the National Football Conference (NFC) won the coin toss.

This outcome is no more likely than 14 consecutive “heads,” 14 straight “tails;” or 16,383 other permutations. The NFC’s streak is, to be sure, a matter of extraordinary good fortune but it is not part of an established pattern from which you can discern anything about the future other than the fact that the odds of the NFC team winning the coin toss for a fifteenth straight time is only 50%.

This won’t stop countless individuals from believing there is a clear pattern. To better understand why this behavior is worth unlearning consider this map of London showing where German V-2 rockets hit the city during World War II. 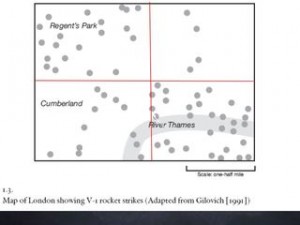 From the map, it appears as though the area in and around the River Thames (in the lower right-hand corner) was being targeted. This pattern might cause a person to take the seemingly logical action of moving to the neighborhood in the upper right-hand corner on the assumption it is safer. 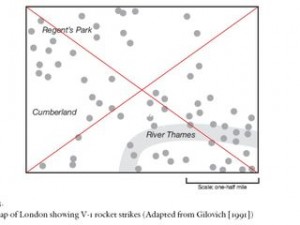 Watch what happens, however, when the boundaries of London are reconfigured into a diagonal pattern. The distribution of the bombs now appears much more evenly distributed even though where those bombs fell hasn’t changed. The result is a visual reminder that our perception of reality can be framed by arbitrary randomness around which we place boundaries—or patterns—after the fact.

In the world of business, the situation is far worse because frequently people “see” established “patterns” after only one or two examples. For instance, how often has a board of directors hired a CEO who was successful in his past job or a university lured a football or basketball coach who had a winning season at his last school only to watch him fail miserably in his new position? The CEO or coach may have looked like a safe choice—much like the one London neighborhood looked safe—but “bombs” have a way of catching up with people if they lull themselves into believing they have discerned a pattern which does not, in reality, exist.

Homework Assignment #26: If a stockbroker advertises she has beaten the market for three consecutive years, how much credence should you assign to the claim?

Extra credit: If LeBron James, a career 53% shooter, has hit his last eight shots in Game 7 of the NBA finals, how likely is he to hit to next shot?