Posted in Ask a New Question, Assumptions, Beliefs, Compassion, Culture, Happiness, Love, One minute unlearning, Opposite May Also be True, Psychology, Spiritual, The Way We See the Problem, Wisdom 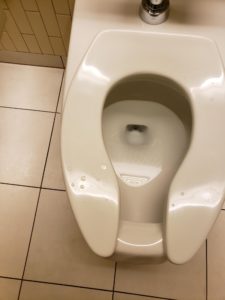 I travel frequently and it is not uncommon that I must use public restrooms. On occasion, I encounter a disgusting and unsanitary toilet (such as the picture to the right).

My initial reaction — pardon the pun — is to get pissed off at the person who did it. This is only natural.

What isn’t natural is that I immediately put together a psychological profile of the culprit in my mind. Typically, he is an overweight, middle-aged, cellphone-talking, self-absorbed salesman who thinks he (and his time) are more important than anyone else.

In the very rare case, my assessment might be correct (although I highly doubt it.)

In an attempt to unlearn this bad habit (and to remind myself that the only person I can really change is myself), I decided to engage in a little mental exercise the last time I encountered a nasty, stained toilet seat.

Instead of casting negative aspersions on the mental image of the culprit, I considered an opposite scenario. I asked myself if could there be any scenario whereby leaving such a mess would be justified — or at least understandable.

To my amazement there were.

For example, I pictured an elderly man with Parkinson’s disease who, through no fault of his own, could no longer control his accuracy. He wanted to clean up his mess but because of his ailing back, he was unable to do so. Ashamed, he quietly left the bathroom.

Or, perhaps, a young boy was traveling with his single mother. Unable to escort the boy into the bathroom, the child took care of business but made a mess because he was nervous. He then departed in haste because he knew his mother was anxiously waiting outside.

Did either scenario actually occur? Probably not, but they are no more or less likely than my initial “self-absorbed salesman” scenario. They do, however, have the advantage of putting a more positive spin on a negative situation. They also had the added benefit of changing my mental attitude from one of anger to one of compassion.

My advice: Next time you encounter a similar situation, try to unlearn your first impression and view the world from a new and different perspective. It might just allow you to blow off steam and keep you from getting pissed off at the world.

2 thoughts on “Pissed Off? Try Unlearning.”