10 Trends Shaping the Future of Fashion 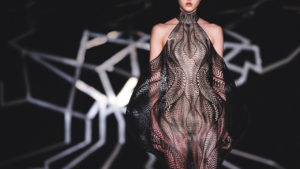 Buckminster Fuller, the noted architect, inventor, and visionary, once said: “We are called to be architects of our future, not its victims.” His advice is apropos for every business, but it is especially so for the fashion industry which is poised to see more change in next five years than it has experienced in the past fifty. To build a more inclusive, sustainable and innovative future, leaders in the fashion industry will want to give serious consideration to these ten transformational trends:

Eco-Fashion: In a nondescript factory in Brooklyn, Modern Meadow is ‘growing’ leather. For all intents and purposes, the leather is indistinguishable from real leather. Before fashion purists dismiss the company’s potential to revolutionize the industry, they need to understand the technology will only improve with time and become more affordable. In fact, lab-grown leather could even improve upon leathers’ texture and become more durable and supple than traditional leather. Moreover, as consumers become aware of the leather industries’ sizeable environmental impact and it’s harsh tanning practices, buyers may not only warm to lab-grown leather, they may eventually demand it.

Bio-Couture: In 2015, Eileen Fisher proclaimed “The clothing industry is the second largest polluter in the world … second only to oil.” Given the industry’s complex global supply chain, it is difficult to assess the validity of Fisher’s claim, but given that the industry produces an estimated 80 billion pieces of clothing a year, it is safe to say that the industry’s environmental footprint is significant. As the world becomes more cognizant of the dangers of climate change, shoppers will begin voting with their wallets and rewarding those companies that are faithful stewards of the environment. As a result, cotton grown without harmful pesticides will become increasingly popular as will innovative new materials such as biodegradable biosteel and Microsilk. (The latter has been bioengineered to mimic real spider’s silk but uses substantially less water and fewer chemicals.) These practices are paving the way for both cotton and silk to be far more sustainable in the coming years.

Fast-and-Furious Fashion: Earlier this year, Adidas announced it had printed 5,000 pairs of shoes using an innovative new 3D printer. With less fanfare, the company also revealed it intended to use the same technology to produce 100,000 pairs of shoes in 2018 and then 500,000 pairs in 2019. The exponential growth of 3D printing will only accelerate from there. As it the technique improves, the production of how and where shoes, jewelry, and other fashionable objects are produced will change. This is because the types of materials that designers will be able to print objects with will increase dramatically. In the hands of inquisitive and creative professional designers (as well as self-educated experimenters), the industry can expect to see a wave of designs that merge function and form in mind-blowing ways. As an added benefit, because the production of 3D printed goods will soon be happening closer to the end consumer, the fashion industry’s long and complicated global supply chains–with its trucks, trains, ships, and warehouses–will be upended.

Mindful Fashion Sans the Middleman: Imagine, in 1990, trying to predict how the Internet–then a nascent, fringe technology–would not only transform the fashion industry but the entire world. It would have been difficult, if not impossible. Similarly, there is a new technological platform known as “The Blockchain” that could have an equally disruptive impact on the world. The Blockchain is a distributed digital ledger. The reason the technology is noteworthy is because it will allow everyone–from farmers, designers, fashion company executives, and even consumers to instantly verify questions regarding garments actual origins. It will also confirm where a product is in the supply chain at all times. Once the verification of terms of delivery takes place, the Blockchain will then permit the execution of payment–via a smart contract. At an extreme level what the Blockchain will enable is for the consumer to confirm that the product is authentic and allow them to pay the designer/producer without utilizing any intermediaries.

Powerful Fashion: In July, Levi’s unveiled Project Jacquard–a “smart commuter trucker jacket” that allows users to dismiss incoming calls, control their music, and access directions with a set of simple gestures. The wearer can do all of these things because the textiles in the jacket (which was produced in partnership with Google and was designed to look exactly like a traditional blue jean jacket) deploys electronic conductive threads that combine metallic alloys with natural and synthetic yarns such as cotton, silk, and polyester. This advance is noteworthy because as smartphones, smartwatches and other wearable technology become more prolific, the need to power these devices (and make them less conspicuous) will increase. In turn, consumers may demand conductive textiles be embedded in more fabrics so that clothing that can generate power from either sunlight, movement, or both to keep their apparel fully charged and their devices functioning.

Programmable Fashion: Another glimpse into where the future of fashion is at the Centre Pompidou in Paris. On exhibit is a piece of art called the Hygroscope. What makes the sculpture unique is that it moves in response to humidity–without motors or computers. In the future, because of continued advances in material science, nanotechnology, and programmable materials such as the Hygroscope, clothing will be able to do much the same thing and tailor its functionality according to external conditions. For example, Nanoporous Polyethylene allows radiation emitted by the wearer to escape thereby allowing them to stay cool without sweating. Other materials may soon be able to detect the presence of harmful ultraviolet rays or environmental pollutants and protect its from such harmful impacts.

Virtual Fashion: Amazon GO, the retailing giant’s new concept store in Seattle, is expected to open to the public in early 2018. What this implies is that in the very near future consumers will be able to walk into a grocery store and grab any item(s) they want and leave the store without ever interacting with a clerk. This seamless experience may not only prove to be a seminal moment in the history of retail, but it could also serve to reshape consumers expectations about what how a retail store should operate and feel. While shopping for fashionable clothing is, of course, different than buying food, a plethora of new technological advances, including augmented reality and virtual reality, will further transform a myriad of shopping experiences. For instance, consumers will be able to visit distant stores in virtual reality and instantly see garments of any style or color digitally displayed on their figure. More importantly, these new digital tools will allow consumers to become active partners in the design process by providing direct feedback to the retailer as well as the designer.

Fashion as a Service:  In the past ten years, the rise of sharing economy platforms such as Uber and Airbnb have taken the world by storm. They stunned powerful incumbents in the hospitality and transportation industries who assumed that people would “never” want to stay a stranger’s house or apartment or trust a stranger to provide them a lift in anything other than a taxi. And yet today, both Airbnb and Uber are estimated to be worth billions of dollars. In this same sense, traditional fashion leaders may continue to dismiss the notion of people sharing designer dresses and shoes. But the trend, already popularized by such companies as Chic by Choice, will likely grow more prevalent as consumers look for ways to both save money and save the planet.

Artificial Fashion: Earlier this summer, Nutella used Artificial Intelligence (AI) to design seven million unique packaging labels for its much-beloved hazelnut spread. The individualized containers were a hit with consumers and continued advances in AI will soon begin to transform fashion as well. It is no secret that companies such as Stitch Fix and Amazon already apply machine-based learning to create personalized recommendations based upon a user’s preferences and social media activity, but the real transformation will come when artificial intelligence begins designing unique articles of clothing. Lest designers think their livelihood is at stake, there is one thing that still beat machines in everything from chess, investing, medical diagnosis, and even fashion design–and that is experienced professionals who can apply their human creativity, experience and intuition to improve upon the recommendations of machines. In other words, human ingenuity plus artificial intelligence will take fashion to new and higher levels of creativity.

Imaginative Fashion: In early October, Alphabet (formerly Google) unveiled a Pixel–a “universal translation” device capable of instantly translating the spoken word into 40 of the world’s most common languages. This suggests that by 2020 all 7.5 billion inhabitants on the planet will be able to communicate with anybody, anywhere in the world, at any time. How so?  By combining this translating technology with smartphones and global high-speed Internet coverage, the potential for ideas, cultures, tastes, experiences, and designs to cross-pollinate will be unlike anything the world has ever experienced. And the opportunity for fresh, innovative and utterly original fashion will be extraordinary. In fact, the industry is approaching a renaissance that even Leonardo Da Vinci himself would have had a hard time imaging.

As any skilled designer knows, it is essential to be aware of new emerging trends and technologies, but one can’t fall prey to “neo-mania”–or the idea that just because something is new that it needs–or even deserves–to be embraced. The ten trends mentioned are all real, but if a person wants to understand what will exist in the future, it is just as important to study what has survived hundreds and even thousands of years.

On this front, the future of fashion is on solid ground. After all, it is a people-focused industry. Not only are clothes a necessary, they are also a statement of distinction and style. Individualized clothing has survived for millennia–and with apologies to Star Trek’s utilitarian, color-coded uniforms–and it will persist well into the future. And it is the apparel and textile designers, companies, and manufacturers who understand that real human needs, desires, and emotions stand at the center of fashion who will be the architects of this bold, exciting new future.

Jack Uldrich is a global futurist and the author of 11 books, including Foresight 2020: A Futurist Explores the Trends Transforming Tomorrow. His website is www.jackuldrich.com.