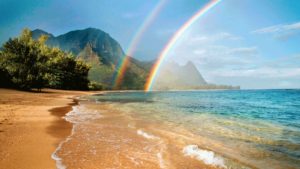 “The future is here–it is just not evenly distributed.”

The above quotation from famed science fiction writer William Gibson has always resonated with me because the future isn’t evenly distributed–it’s often on the fringe of society. Over time, however, fringe ideas move into the mainstream. (I was humorously reminded of this gradual shift during the 2014 Macy’s Day Thanksgiving Parade.)

It behooves business leaders, therefore, to pay attention to fringe ideas because they can offer hints into where the future is headed. To this end, here are five fringe trends savvy and mindful business leaders should heed.

Trend #1: The Half Earth Project. In his 2016 book of the same name, noted biologist and Harvard professor E.O. Wilson, proposed conserving half of the earth’s land and sea for the purpose of better protecting the planet’s rich biodiversity of plants, insects, and animals. Today, only 17 percent of the planet is conserved, but this could change as more people become aware of the benefits that will accrue to society from this act. The trend could also grow because of the following four trends.

Trend #2: Legal Rights for Animals/Natural Resources. To some people, the notion of granting legal rights to animals and non-living entities might seem frivolous, unnecessary, or even detrimental. But in 2005 an animal passed a self-consciousness test–something long believed to be the sole purview of humans and which served as the legal and moral rationale for humankind’s dominion over other living creatures. Since that time courts in the United States, the UK, the European Union, Argentina, and New Zealand have heard cases involving the legal rights of animals and, in 2017, New Zealand wrote into law that animals are sentient beings. As the science of animal cognition advances, other countries may soon follow suit in extending legal rights to more animals.

New Zealand has gone a step further by advancing “legal personhood to a river.” If this sounds ridiculous, it is worth noting that the US legal system grants legal personhood to corporations. If a corporation can be afforded equal protection as a person under the law, why shouldn’t a river? Is Coca Cola more important to the U.S. Economy than, say, the Mississippi River?

If either or both trends continue, it is not a stretch to think more courts and countries may grant legal rights to other sentient beings and other natural resources, including lakes, reefs, prairie grasses, and mountains. If this occurs, Trend #1 could grow and more of the planet could become protected.

Trend #3: Youth Activism. On March 15, 2019 an estimated 1.4 million students staged “School Strikes for Climate Change” in 114 countries. And on April 19, over four thousand young Amazon employees demanded their employer take more dramatic steps to reduce its carbon footprint. As these young students and employees become active and move into greater positions of social, economic, and political power, could they use the levers of commerce, law, and moral authority to limit the amount of land and water available to humans as a means to address climate change and/or protect the planet’s rich biodiversity?

So what does all this mean? The answer may be found in Trend #4: Bolder Valued-Based Corporate Action. In December 2018, Patagonia–a well-regarded corporate environmental leader–changed its progressive mission statement to an even bolder statement: Save the Planet.

Some might argue that this action is merely in keeping with Patagonia’s brand–which is true. But in March 2019, General Mills announced it was dedicating 1 million acres to regenerative agriculture, and Everland and Telia have also boldly stepped into the ethical environmental arena and announced specific dates by which they will become “zero waste” and CO2 neutral.

Companies unwilling to take bold action to save the planet may therefore soon find themselves on the wrong side of powerful and fast shifting political, legal, economic, and social trends. If one scans the horizon, it is not difficult to imagine the emergence of a Fifth Trend: Companies Being Rewarded Economically By Consumers for Adopting Radical Actions.

Just connect the dots: Companies that take bold action (Trend #4) will be rewarded by the consumers of Trend #3 (youth activism) for protecting half the earth (Trend #1) and granting legal rights to animals/natural resources (Trend #2).

Jack Uldrich is a leading global futurist committed to assisting companies and organizations transcend traditional boundaries to create a more humane and sustainable future. His forthcoming book, A More Beautiful Future: Why It Matters and How to Create It, will be released in early 2020.