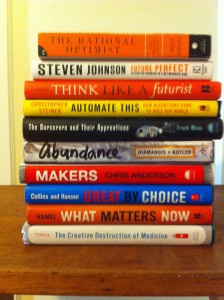 In 2012, I published my latest future-related book, Foresight 20/20: A Futurist Explores the Trends Transforming Tomorrow (written with able assistance of fellow futurist Simon Anderson). The book was shaped in no small way by the thoughts, ideas and writings of numerous other futurists, thinkers and authors. As a small token of my appreciation for those who make it a habit to think deeply about the future and then share their ideas with us, I annually publish a list of important future-related books. Below is my list for 2012. (If you have other suggestions please free to mention them in the comment section below. By no means is my list meant to be considered comprehensive.)

1. The Creative Destruction of Medicine: How the Digital Revolution Will Create Better Health Care by Dr. Eric Topol. The field of medicine is about to go through its biggest shakeup in history. Don’t believe it? After reading this book, you will. For evidence, consider these two “factoids”: By the end of 2013, you’ll be able to purchase a $99 app that converts your smartphone into an electrocardiogram (a machine that today costs $30,000); and by the end of the decade it’ll be more expensive for you to flush your toilet than sequence your genome. Not impressed? Remember that less than a decade ago it cost $2 billion to sequence a genome. If you’re in the healthcare industry, it would behoove you to pick up this book and gain an appreciation for where your field is headed.

2. What Matters Now: How to Win in a World of Relentless Change by Gary Hamel. Here is just one great quotation from this important book: “Companies get caught out by the future not because it’s unpredictable, but because it’s unpalatable.” If you can handle some tough medicine, read this book. It’ll help you future-proof your organization.

3. Great by Choice: Uncertainty, Chaos, and Luck—Why Some Thrive Despite Them All by Jim Collins. Think tomorrow’s most successful companies will be lead by bold, risk-seeking visionaries? I did but after reading this book I’ve revisited this belief and come to a more nuanced understanding that the best leaders and their companies are also disciplined, empirical and paranoid.

4. Makers: The New Industrial Revolution by Chris Anderson. The digital revolution of bits (i.e. zeroes and ones) has changed the world through the computer, the Internet, smartphones and social networking. The world of physical things—of atoms and molecules—is, however, five as big and society is now on the cusp of a revolution in how these products are created and built. If you’re interested in learning how manufacturing is about to become democratized and decentralized, pick up this book.

5. Abundance: The Future is Better Than You Think by Peter Diamandis. Are you pessimistic about the future? After reading this book, I can guarantee you won’t be. Cheap, clean sustainable energy; low-cost preventative health care; and a high quality, free universal education aren’t just utopian pipedreams—they are all being pursued, developed and expanded upon today.

6. Future Perfect: The Case for Progress in a Networked Age by Steven Johnson. Did you know that flying in an airplane is 100 times safer today than it was in 1964? Similarly, smoking rates, divorce rates and violent crime rates are also going down. (The latter is true in spite of the recent Sandy Hook tragedy.) To find out why this is the case and to learn how new forms of networking are benefiting society in innovative and surprising ways, I encourage you to read this book.

7. The Rational Optimist: How Prosperity Evolves by Matt Ridley. Much like the two previous books, this one—as you might surmise from its subtitle—is also optimistic the future. And why not? Here are just two small but often overlooked examples of how the world around us has improved: In 1970, only 36 percent of all households in America had air conditioning. By 2005, 90 percent of poor households in America had air conditioning. Second, today the average car emits less pollution traveling at full speed than a parked car did in 1970 from leaks! If you’re ready to take a walk on the “bright side of life,” check out this book.

8. Think Like a Futurist: Know What Changes, What Doesn’t, and What’s Next by Cecily Sommers. As a futurist, I don’t happen to think as the author suggests but that’s precisely why I enjoyed this book—it challenged my own assumptions. And if there is anything the future teaches us it is that it’s dangerous to cling too closely to our ideas of how the future might unfold. If you’re looking for a practical guide to help you or your organization think about the future, this book offers a solid place to start.

9. Automate This: How Algorithms Came to Rule Our World by Christopher Steiner. Were you aware that algorithms—or computer “bots” if you prefer—have already written symphonies as moving as those written by Bach or Beethoven, diagnosed cancer patients with more accuracy than an experienced doctor, written news articles indistinguishable from those of veteran news reporters, and driven vehicles on highways with greater control than a human driver? Well they have and if you’re curious about where these algorithms might take society next (and how they may put you and I will need to rethink our jobs in the near future), this book is a great place to start.

10. The Sorcerers and Their Apprentices: How the Digital Magicians of the MIT Media Lab Are Creating Innovative Technologies That Will Transform Our Lives by Frank Moss. Airbags, Guitar Hero, and e-readers—not to mention countless other gadgets and devices which we today take for granted–didn’t simply appear out of thin air, they came out of MIT’s Media Lab. If you’re interested in getting a peek into what’s coming next, this book provides ample hints.