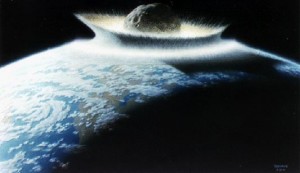 The future may be unknowable. This does not, however, imply it can’t be prepared for.

Below are just five future risks I have—and will—address in various keynote presentations to the insurance industry in the coming months.

1. Economic instability: Foxconn, the large Chinese electronic manufacturer, recently announced a hiring freeze. Eventually, this “freeze” will turn to mass layoffs as the company executes its plan to deploy 1 million robots by 2015. Unable to find gainful re-employment these workers will seek relief from the Chinese government. Beset with its own problems, the government may not be able to satisfactorily address the workers’ grievances. The resulting internal economic chaos could manifest itself in broader international economic instability.

2. Economic disruption: General Electric has announced it intends to “print” aircraft engine parts by 2015 and, in Winnipeg, a company is on the verge of “printing” an entire automobile. As 3D manufacturing technology continues to evolve and improve, the global manufacturing sector—and the global supply chain—could be turned on its head as thousands of manufacturing and transportation companies find their industries and business models are no longer relevant in this new future. Similar disruption advances in higher education, genomics and energy could also change those industries in a proverbial blink of the eye.

3. Digital Wildfires: As the spread of information accelerates one of the consequences is that false and misleading information also spreads faster. Often this bad information is quickly refuted and no harm is done. Sometimes, though, the faulty information triggers a rapid and violent response. (Think of how the low budget video production of the “Muhammad Movie” fueled riots against Western interests in 2012.) In the near future, YouTube clips, Tweets, Facebook posts or other future social media could spark actions that elicit retaliatory actions and, in turn, escalate into major firestorms with long-lasting economic, political and social implications.

4. Radical Life-Extension: In the West, citizens are getting more obese and the incidence of diabetes and heart-related illness is increasing. From this perspective, it is easy to conclude life expectancy will slow and, quite possibility, decrease. There is an alternative scenario and it is that continued advances in genomics, biotechnology, nanotechnology, regenerative medicine and predictive healthcare care could significantly speed up advances in life expectancy. The effect of millions of octogenarians living a decade or more longer is profound.

5. Unilateral geo-engineering. In January, air standards in Beijing were the worst-ever recorded (or as the New York Times reported “crazy bad“); in Australia temperatures were so hot the weather service added two new color codes to its weather maps; and, in 2012, an ice shelf the size of the continental United States melted. Some in the scientific community are proposing radical geo-engineering techniques to help cool the planet. The unintended consequences of such actions are serious but, desperate for relief, some nation-states may choose to act anyways.

Parties interested in learning more about Jack Uldrich’s engaging, entertaining and enlightening keynote presentations may contact him at [email protected] or 612.267.1212.

Five Future Trends for the Insurance Industry
A Future of Black Swans
Future Forecast: Hazy with a Chance of Catastrophe