For the Future: Feel the Fear of Failure and Do It Anyways 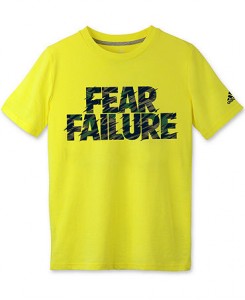 A Mediocre Message for Future Success

Like millions of other parents across America, I spent this morning watching my son’s soccer game.

On the sideline, not far from me, was the parent of an opposing player wearing a t-shirt that read “Fear Failure”.

As a competitive person, I understand the sentiment behind the slogan but it is an awful message.

If you fear failure too much you’ll never try anything new.

And if you can’t create original things your future will be severely handicapped.

A far better slogan would be: “Feel the fear of failure and do it anyways”.

Also, to those of you who still believe the idea that “failure” has no place in the sports arena, watch this wonderful commercial from Michael Jordan entitled “Failure.”

2 thoughts on “For the Future: Feel the Fear of Failure and Do It Anyways”