Posted in Construction, Do the Impossible, Food, Future, Futurist 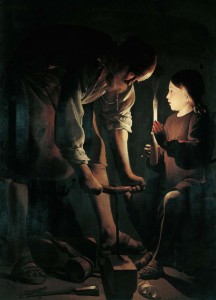 In his wonderful book, The Rational Optimist: How Prosperity Evolves, Matt Ridley reminds us that the amount of artificial light produced with an hour of work has increased a staggering 43,200-fold since the recording of the first sesame-oil lamp in Babylon in 1750 BC.

Here’s another way to think of this: In 1750 BC it would have taken the average person six hours of work to produce one hour of light. Today, it takes them less than half-a-second. (With the continued advancements in LED lighting this rate is only going to decrease further in the near future).

What is more extraordinary is that the future will continue to deliver similar advances in energy, food production, manufacturing, computing, robotics and health care.

Take a look at the above painting and now ask yourself this question: What painting or photo from 2012 might future generations look back at and wonder, “How did they ever get anything done?”

Who is say that society won’t achieve additional 43,200-fold improvements?