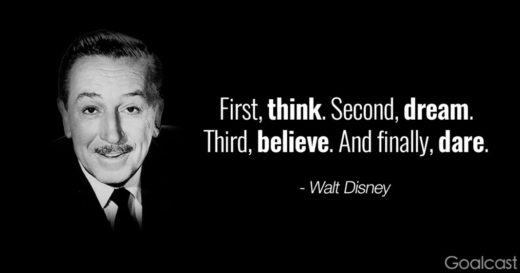 Think: It’s Never Going to Be Perfect, So Just Get It Done. Thinking is great. Action is better.

Think Twice: Impossible Foods is Trying to Make Fake Fish Now. The aquaculture industry needs to Think Twice about this trend. It could–much like the meat industry–be on Thin Ice!

Think Different: How to Think Long-Term. At 23-minutes this video is obviously longer than 15 minutes, but for those of you who can spare an extra 8 minutes, you will be rewarded with some powerful new insights.

Think Smarter: To Excel in Innovation, You Have to Invest in Nature. The nature of the future and the future of nature are interdependent.

Think Harder: Traditional Higher Education is Losing Relevance. Here’s What’s Replacing It. Leaders in higher education–really all educational leaders–need to be thinking much harder about the future. This article can help.

Think Like a Child: Biggest Barrier to Leadership Success May Be Success Itself. I have been writing about “unlearning” for more than a decade. It’s nice to have a new voice with new insights join the choir.

Think in Questions: Has Humanity Reached “Peak Intelligence”? I certainly hope not, but there is some supporting evidence that we have; and, if society has, this provocative question is something to think about.

Think 10X: Tree Planting Has Mind-Blowing Potential to Tackle Climate Crisis. If you are thinking about planting a tree–and, really, you should–think about planting 10 instead! The planet and future generations will thank you.

Think Bigger: Five Couples Lined Up for CRISPR Babies to Avoid Deafness. Assuming there are no unintended consequences (which is always a real possibility/danger), this trend could grow much bigger. If it does, the healthcare and pharmaceutical industries will never be the same again.

Think Faster: How the US Will Get to a 50 Percent Renewable Electric Economy by 2030. Leaders in the automotive, utility, energy, agriculture, and manufacturing sectors need to think about the benefits of this transition today! It could arrive even faster than 2030.

Think Sustainably: Sweden’s Recycling is So Revolutionary, the Country has Run Out of Trash. If it can be done in Sweden, other countries need to begin thinking about how to step up their efforts.

Think Historically: The Stopwatch: 200 Years Old and Still Ticking. Man has now defined a second of time to be exactly 9,192,613,770 cycles of radiation of a cesium atom. That’s a fascinating factoid, but is there wisdom in this definition of time? (Did you know that the Barasana and Amondawa people of the Amazon have no word for “time.”)

Think Visually: Helio Time. This super cool two-minute video might provide you a new appreciation for the immensity of time.

Think the Unthinkable: Scientists Create Beanless Coffee. You might be drinking artificial coffee sooner than you think.