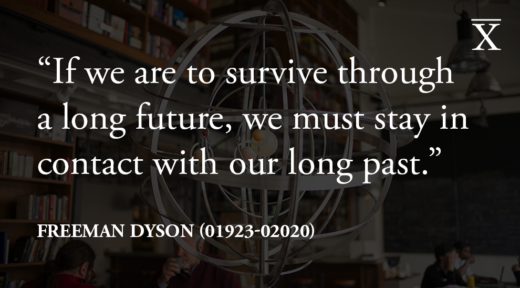 Think: The CoVid19 crisis is real. Fear is understandable, but leadership is essential. As a leader, I encourage you to take some time today to begin reimagining your role in helping to recreate a better future: RE: Leadership–Reimagining Leadership is a Post-Crisis World.

Think Twice: Have you ever thought of putting up an “Under Renew Management” sign in your business? If not, you should. I explain why in this article.

Heart-Centered Thinking: How does a leader get to “heart-centered thinking”? I don’t have the answer, but it might help to first change our mindset and then begin working on our breathing. This article-A is for Abundance–can help you do both.

Think Different: To think differently, it helps to be open to learning from unconventional sources. As I outline in this article, Australian Aboriginals can help you reframe the future.

ReThink: Aboriginals are not the only people who can help reframe the future. The Long Now Foundation has an interesting technique to help us rethink the future.

Think Smarter: Quantum computers are coming. As a leader, you need to begin thinking smarter about who you may want to partner with to leverage this incredibly powerful–and smart–technology: Industrial Giant Honeywell Says It Has Built the World’s Best Quantum Computer.

Think Harder: If I was in the automotive industry, I would be thinking harder about the potential ramifications of this technology: Goodyear’s Biodegradable Concept Tire Regenerates its Tread.

Think Like a Futurist: The author isn’t a futurist per se, but I’d argue that anyone who spends time thinking about the future is worthy of the title. Regardless, this is a thoughtful article: How to Predict the Future in an Uncertain World.

Think in Questions: How will we buy things in 2030? That’s a good question, here’s a possible answer — smart stores and personalized experiences.

Think 10X: Want to know a trend that could grow 10X in the future? Start following gene-editing advances: CRISPR Was Just Used to Restore Sight to a Blind Person.

Think Bigger: Battery storage is going to get bigger, much bigger. Here’s why: Elon Musk’s Tesla Battery Farm in Australia Has Been a Huge Success.

Think Faster: It’s easy to think that the world will slow down because of CoVid19, but it’s also important to remember that other powerful forces will continue to propel us into the future: Cloud Data Speeds Set to Soar.

Think on the Edge: To diversify your thinking, go to the edge. This short article helps explain why: Social Capital is All About Where You Are, Not Who You Know.

Think Sustainably: Zero carbon by 2050 is possible: Here’s what we need to do.

Think the Unthinkable: To many people the idea of getting rid of packaging, plastic, and electronic waste might seem unthinkable, but it is possible and it may be closer than many people believe: New Rules Could Spell End of Throwaway Culture.