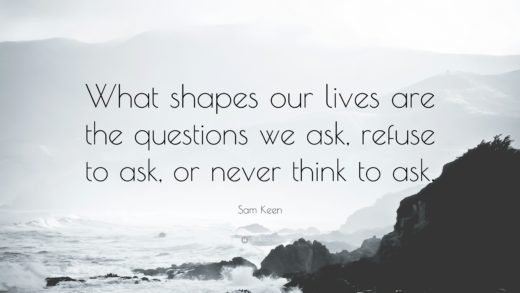 Think: Are you thinking enough about changing customer preferences? In the near future, people may no longer buy products but, instead, subscribe to outcomes.

Think Twice: Think you’re a clear thinker? Think again and Put Your Intuition on Ice. Or, as I like to say: Think Twice—you are on Thin Ice!

Think Historically: The Wright Brothers’ first flight only lasted 12 seconds. In this same way, Google’s recent demonstration of “quantum supremacy” is a small but historic achievement that could herald seemingly unbelievable possibilities in the near future.

Think Different: Perhaps, it is time to think differently about how you deliver some of your products: Alphabet’s Wing Begins Making First Commercial Drone Deliveries.

Think Smarter: At least one CEO has taken my “Big AHA” to heart and is using Awareness, Humility, and Action to create meaningful change in her corporation: Keys to Success Amid Change in the Bakery Industry.

Think Harder: To my many supply chain and trucking industry clients … Driverless Electric Trucks Are Coming, and They’ll Affect You More Than You Think. Therefore, you will need to think harder about your future.

Think Like a Futurist: Fellow futurist Amy Webb has proposed an excellent idea: A National Office for Strategic Foresight Anchored in Critical Science and Foresight.

Think 10X: Researchers Design New Material Using Artificial Intelligence. AI is only going to get smarter. As it does, the number of new materials could grow exponentially.

Think Faster: Meet Alice, the Electric Plane That Could be the Future of Air Travel. Because of this trend, regional transportation habits could change faster than many people expect.

Think Radically: The fast-food industry needs to keep an open mind to the future: These $50 Chicken Nuggets Were Grown in a Lab.

Think Anew: For my clients in farming and agriculture, 3D Printing, Vertical Farming, and Material Science Are Overhauling Food. It may be time for you to think anew about your industries.

Think Sustainably: If ever there was an industry that needs to begin thinking sustainably, it is the fashion industry! It Emits More Carbon Than International Flights and Maritime Shipping Combined.

Think the Unthinkable: Can Human Mortality Be Hacked? Some people believe it will soon be possible to live to 1000. Regardless of whether you think this is wise or not, it is time for society to begin thinking about this once “unthinkable” prospect.