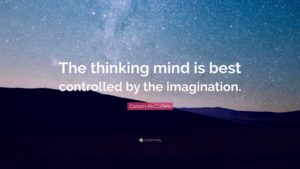 Think:  Every now and again, it is important to “think about our thinking.” To this end, this article on how men consistently overestimate their intelligence is worthy of some “think time”– especially if you’re male (although, as the article states, women are not above making the same mistake). Personally, I know I’ve overestimated my intelligence–particularly with regards to  my estimates surrounding how fast or slow I thought a particular technological trend would unfold. In the after-analysis of my mistakes, my main shortcoming usually boiled down to me over-estimating how much I thought I knew. (Put another way, I also didn’t know what I didn’t know.)

Think Fast: After reading this article, A Million Times Faster: DNA Nanotechnology Could Speed Up Pharmaceutical Development While Minimizing Costs, these words of Winston Churchill sprang to mind–“We shape our tools and then the tools shape us.” The implication of the article is that a host of new drugs could be developed sooner than many in the pharmaceutical industry think possible and, in turn, these new drugs could shape us (and our understanding) of disease in some powerful ways.

Think Bigger: Drone deliveries have been tested in a number of communities around the world for a few years, but the trend appears poised for take-off–Alphabet’s Wing to Begin Biggest Test of Drone Deliveries in Texas. In addition to affecting the retail and food service industries, drone deliveries could have significant implications for how urban areas may need to be redesigned in the near future.

Think Harder: By separating sex from procreation, the introduction of “the pill” (the oral contraceptive for women) changed the world in some powerful ways. In this same way, it is possible that a new birth-control pill for men could also change society in some significant ways? At a minimum, it is something to think about.

Think Different: I am of the opinion that no one source of clean renewable energy (solar, wind, geothermal, tidal, fusion, etc.) will “win” the future. Instead, the future will require a series of many different renewable energy sources. Until reading this article, I had never given rain any consideration as a potential source of energy but, according to this article, perhaps I–and you–should.

Heart-Centered Think: The concept of “enough” (as in having enough money, material things, etc) is not a science, it is a choice. In this post, Seth Godin introduced me to a new Japanese word–chisoku–that elaborated on this idea. Chisoku is similar to the Swedish concept of “lagom,” but I mention this because it is important to think about your personal definition of “enough” every now and again. Life is too short to constantly be striving toward some false concept of “enough.” As Lao Tzu said, “He who knows that enough is enough will always have enough.”

Afterthought: “All your houses are haunted by the person you might have been.”–Hilary Mantel