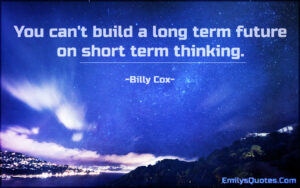 Think: One of the biggest problems in the world today rests in our inability to think long-term. Whether you’re a business leader, a parent, an aunt or uncle, an educator, or just a concerned citizen, here are six ways to think long-term.

Think in Questions: Here is a question worth pondering, especially if you work in banking, finance, or retail: Why Might Bitcoin Be Crucial in Our Cashless Future?

Think Harder:  This may not be everyone’s idea of a good time, but in the near future Elon Musk says he will be able to stream music directly into your brain. Such a technological advance should give all of us, if not pause, at least something to think a little about.

Think the Unthinkable: Does unlimited energy without waste sound like an unthinkable goal? Think again: Production recently began on a giant nuclear fusion reactor in France.

Heart-Centered Thinking: Love is a complicated thing, as they say. In the future, it could become a lot more complicated. This is a fascinating article on how love drugs will shape the future of our relationships.