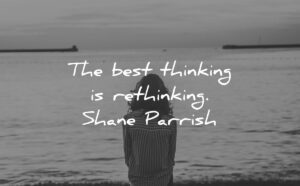 Think: Want to create more time for thinking? Well, there is a potential solution and it can be found in this simple yet hard-to-follow technique: The Three or Four Hour Rule.

Think Hard: Bottled water is 3500 times worse for the environment than tap water, according to scientists. It is findings such as this that will prompt more consumers to change behavior with regard to how much plastic they buy and use. It will also entice more companies and innovators to get serious about developing effective, eco-friendly biodegradable and compostable plastics.

Think Smarter: Advances in artificial intelligence are helping researchers better understand how Parkinson’s Disease progresses in patients. This information, in turn, will help those suffering from the disease receive better treatment. Combined with advances in gene editing, the prospects for aging well in the near future continue to improve.

Think Smarter: More than 450 airlines can now use IBM’s digital health pass–a type of vaccine passport. The technology is based on the Blockchain and holds great potential because it addresses many people’s concerns over privacy because it does not require governments to create and control databases that contain people’s personal information. In addition to facilitating international travel, the advance portends the day in the not-too-distant future when even passports may become obsolete.

Think the Unthinkable: The latter news about “vaccine passports” might strike many people as both unwise and implausible (given political opposition), but people and politicians can change their minds about such things, especially if CoVid re-emerges in a bigger, more virulent form. Worse yet, these new variants could beat current vaccines. As unpleasant as this possibility is, it is something we all need to take some time to think about–the pandemic can reemerge in a larger and even more deadly form.

Thought of the week: “Simplicity is the hallmark of truth, but complexity continues to have a morbid attraction.” –Shane Parrish