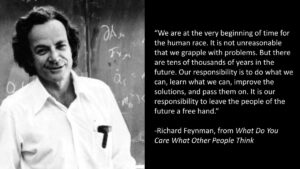 Think: Last week, Germany’s supreme constitutional court ruled that the government’s climate protection measures were insufficient to protect future generations.  This is a BIG deal. It is, of course, a win for the climate movement but it also requires the government and businesses to meet specific reduction targets for each individual year between 2022 and 2050. Look for courts in other countries, including the U.S., to do the same.

Think Persuasively: This is an insightful and valuable article: Persuading the Unpersuadable. I encourage anyone who has to work with arrogant, narcissistic, or disagreeable people to read the article, think about it, and then implement some of the strategies. (The article offers very actionable strategies.)

Think Harder: Making plant-based burgers and chicken nuggets are relatively easy to make. Steaks have proven much more difficult, but if an Israeli start-up has anything to say about it, it may not be too long before your local butcher gives up his/her knife for a 3D printer: An Israeli Startup is 3D Printing Cultured Ribeye Steaks.

Think Wisely: One of my favorite authors and thinkers, Kevin Kelly, has a tradition of offering bits of unsolicited advice on this birthday every year. This year’s list does not disappoint. If you are a seeker of wisdom give Kelly’s list a quick read. It’ll give you plenty to think about.

Thought of the week: “Be governed not by the tyranny of the urgent but by the elevation of the important.”

P.S. Bonus: Think Differently. I am a big fan of optical illusions for the simple reason that they force us to confront the fact that we don’t see reality as clearly as we like to believe we do. This illusion is particularly good: These Balls are all the Same Color!