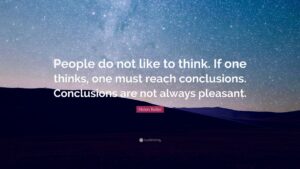 Think: Fellow futurist Faith Popcorn and I were recently asked by Forbes Africa to identify ten trends we felt would define the future of Africa in the coming decade. Our respective insights can be found in this article, What the Futurists Say: 10 Ideas and Industries for the Next 10 Years. The reason you might want to spend some time thinking about the future of Africa is because it will play an outsized role in shaping the future of the world over the next decade.

Think Smaller: It is human nature to think “bigger is better,” but that’s not always true. This article, Why Your Inner Circle Should Stay Small and How to Shrink It, makes a compelling argue for why you may want to surround yourself with a smaller but more carefully curated group of people. (Big take-a-way: If you have a hard time saying no to people who wish to connect with you, your undiscerning generosity may be self-defeating because you may be making less of an impact on the world than you otherwise could.)

Think Smarter: I don’t often share videos but this 28-minute presentation by Horace Deidu on “10 Micromobility Commandmants” was so informative and enlightening that I was compelled to share it with you. If you work in transportation, city planning, or construction industries, I can guarantee you that it will be worth spending this week’s “thinking time” watching–and then contemplating on–Deidu’s talk. It’s good stuff!

Think Harder: One of the biggest unexpected developments of the pandemic has been how it has fundamentally altered people’s attitudes toward work. For those of you who keep hoping things will “return to normal,” I am sorry to keep repeating what I have been saying for some time–IT WON’T! As such, those of you who are struggling to find workers will not only have to increase wages, you will need to rethink your approach to hiring workers. As this article, The Great Resignation is Accelerating, explains for many workers their lives no longer revolve around work, rather work revolves around their lives. As a result, it is not the worker who must change but the employer. This shift is something all of us must think harder about.

Think Bigger: Vertical farms supply less than five percent of the United States’ fresh produce (lettuce, micro greens, herbs, etc.), but that could be about to change in a significant way due to continued advances in robotics, LED lighting, sensor technology, and artificial intelligence. If you are involved in food in any way, vertical farming is a trend that could explode in the coming years and it is something you should be thinking about today. This article, Meet the Urban Farmers Shaping the Future of the $5 Trillion Agriculture Industry, is a good place to start.

Afterthought: “I am a man of fixed and unbending principles, the first of which is to be flexible at all times.” — Everett Dirksen