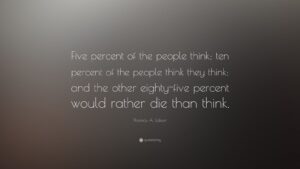 Think: I am in Montana this week leading a three-day experiential leadership program based on my book, Into the Unknown: Leadership Lessons from Lewis and Clark’s Daring Westward Expedition. In the book, I discuss the role optimism played in the Corps of Discovery’s historic journey, but this article by Kevin Kelly, The Case for Optimism, is outstanding. I encourage everyone to read it and think about applying its lessons to help you and your organization create a more desirable future. (Quick take-a-way: In the long run, optimists shape the future.)

Think Shorter: The movement towards a shorter work week seems to be picking up steam. A few weeks ago, I mentioned that Kickstarter would begin experimenting with a 32-hour work week (with no reduction in pay). Now, Scotland has joined Iceland, Spain, and Japan in the list of countries exploring the idea of a 32-hour work week on a nation-wide scale. Many leaders (who tend to be hard working people) may scoff at this idea, but they will soon find themselves in competition for high-quality workers who may want a shorter work week.

Think Bigger: Giant Eagle, a technology-minded grocery chain, has now installed autonomous shopping technology at four more of its convenience stores in the Pittsburgh area. The confluence of improved technology (cameras, sensors, artificial intelligence), continued worker shortages, and social distancing in the era of Covid suggest that the trend of “cashierless stores” may grow more prominent in the near future. If you are in the retail business, it is not too soon to be thinking about this trend.

Think Cheaper–and Cleaner: The world’s first crewless, zero-emission cargo ship is expected to set sail from Norway later this year. Given the recent rulings in the German and Dutch courts requiring companies to do more to limit their carbon emissions, look for more shipping companies to employ all electric ships in the near future. The fact that the autonomous ships will also be more economical to operate (because fewer workers are necessary) will be an added impetus for the new ship’s adoption

Think the Unthinkable: In my 2012 book, Foresight 2020, I discussed the possibility of a pandemic striking the world and encouraged leaders to take the possibility more seriously. In the same book, I also discussed the possibility of a solar storm striking the earth. We all now know the impact of not thinking harder about preparing for a pandemic. Unfortunately, too many people are still not taking the threat of a solar storm and what it might do to the world’s satellites and electrical grid very seriously. This article provides a good overview of why every leader should spend a little time thinking about–and preparing–for a solar storm.

Afterthought: “Judge a man by his questions rather than his answers.”–Voltaire