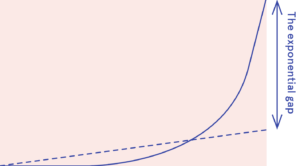 Think: If you read one article this week, I encourage you to read–and then think about–this one: The Exponential Age will transform economics forever. I have been writing about the importance of understanding exponential growth since my 2008 book, Jump the Curve. I revisited the theme again in my 2020 book, Business as Unusual. This article (written by Azeem Azhar), however is an outstanding overview of this important theme and his new book, The Exponential Age.

Think Cheaper: The first commercial carbon removal plant just opened in Iceland. This is an interesting development. The scale of the project is currently too small to make a meaningful impact in combating rising carbon dioxide emissions, but if the technology follows the same 99 percent price drop the solar industry experienced over the last four decades, “direct air carbon capture” could become an effective long-term solution. In the mid-term, expect companies looking to meet “net zero” pledges to utilize Climework’s technology.

Think Smarter: As a former naval intelligence officer, I have a high regard for the work that professional intelligence analysts perform on a routine basis. This said, the world is changing fast and the intelligence community needs to get more serious about unlearning some of its old habits and leveraging new advances in artificial intelligence, data analytics, and open-source platforms. This article, Reimagining Espionage in the Era of Artificial Intelligence, is a great place to start.

Think Ambiguously:  Grocery and convenience stores are currently finding it difficult to find qualified workers. One way to address this shortage is to employ “Just Walk Out” technology and convert stores into a “cashierless” stores—as Whole Food’s just did this at two stores in Washington DC and Sherman Oak, California. At some point in the near future, labor unions are likely to begin stepping into the debate. How it will all play out may require today’s leaders to embrace ambiguity–some stores will go “cashier less” and others won’t.

Think Harder: The British government intends to introduce legislation later this year requiring every newly built home to install an electric vehicle charger. The legislation will also require commercial and multi-family units to have one recharger for every five parking spaces. Regardless of one’s opinions on government mandates, any business leader who will be impacted by electric vehicles needs to spend some time thinking about how this policy–if it is adopted by other governments-could facilitate the transition to electric vehicles.

Afterthought: “More than any other personality trait in my life, all-or-nothing thinking has caused me to make huge mistakes and bad judgements, hurt people and myself, withhold love, and misinterpret situations.”–Richard Rohr