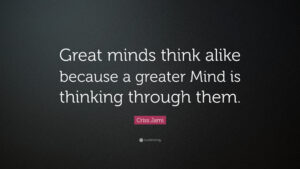 Think: The world continues to change fast. This week, in Dallas, robots are now taking over restaurant jobs because owners can’t find enough workers. Meanwhile, in Africa, Alphabet is testing a super high-speed wireless broadband technology capable of beaming 700 terabits of data. As they say, “You ain’t seen nothing yet.”

Think Bigger: Kelekona is developing an electric vertical takeoff and landing (eVTOL) vehicle capable of transporting 40 people at once. This is significant because it could make short flights — such as Los Angeles to San Francisco; New York to Washington, D.C.; Paris to London, etc–faster and more affordable. (I continue to believe that electric aircraft will transform regional transportation habits in a profound way.)

Think Bold: The promise of fusion power always seems to be ten years away. Last week, however, a single laser shot sparked a fusion explosion that produced eight times more energy than had ever been produced. This development puts “ignition”–a term used to denote when a fusion reactor produces more energy than it requires to produce that reaction–tantalizingly close to reality. There are still significant obstacles to be overcome but expect to be hearing more about the promise and potential of fusion energy in the near future.

Think the Unthinkable:  I will be the first to admit I don’t know much about space, but two weeks ago you may recall I shared an article about  the possible catastrophic effects of a solar storm. This week, I learned that U.S. generals are planning for a space war they see as all but inevitable. I don’t like thinking about this stuff any more than the rest of you, yet we must prepare not just for the world that we want but for the world as it is.

Think Harder: Africa is expected to be able to vaccinate only 17 percent of its population by year-end. In addition to the obvious humanitarian crisis this portends, it is potentially awful news for the rest of the world because it could make Africa a breeding ground for new COVID variants. These new variants, in turn, “could send the whole world back to square one.” (Whether you like it or not, the world is highly interconnected and it is imperative that we all think more about our “interconnectedness.”)

Afterthought: “In medical school, they spend days teaching people to operate on lungs, and no time at all helping young doctors learn how to get their patients to stop smoking and get vaccinated. The technologists forget about the human issues.”–Seth Godin