Take a Swim in the Lake of Tomorrow 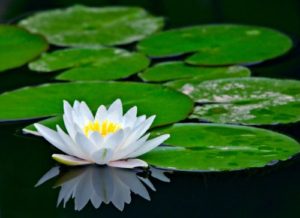 One of my favorite stories about the power of exponential growth is a story about the lake and the water lily, and it can help anyone that needs to be jolted out of their current—or what I called their linear—mode of thinking.

In a nutshell, here’s the story: Imagine a lake that sprouts a single lily on June 1 and its splits into equal size lilies every day for a month. Further assume that the lilies of are such a size that at the end of the month the entire lake is covered with the pesky aquatic plants.

Under such a scenario what percentage of the lake do you imagine would be covered on June 20th—or two-thirds of the way into this exercise? One percent? Five percent? Ten percent? Perhaps higher?

I am sorry to say that not only are all of the above guesses wrong, they are in the words of my old teacher, Mr. Senta, “dangerously wrong.” By Day 20, lilies cover roughly 0.01 of the lake—a wee one-tenth of one percent.

What transpires in the next 10 days, though, is nothing short of transformational. Here’s the math (some of the numbers have been rounded slightly):

I recount this story because it reveals a common misunderstanding about exponential trends. In the beginning, most people don’t even recognize the trend as exponential. For instance, a single lily growing to cover one-tenth of one percent of a lake hardly seems noteworthy, let alone deserving of special attention.

The problem with this negligence is that it can cause people to ignore or dismiss some very big and significant trends. All the while exponential math continues to weave its inextricable magic. Unfortunately, all too often, by the time people finally do grasp how fast things are progressing–say on Day 28 of the pond example–and hope to either capitalize on its explosive growth or, alternatively, avoid being overwhelmed by its growing power, it is too late.

Here’s the point. The forces that I mentioned earlier: computers, data storage, the sequencing of the human, brain scanning, artificial intelligence; genetic algorithms, robotics, nanotechnology and knowledge itself, have been and are all continuing to advance at astounding rates; yet, today, they cover only one-tenth of one percent of the proverbial lake.

It is essential, therefore, that the “Exponential Executive” think of today as being the metaphorical equivalent of “Day 20” in the pond analogy. The really big developments are still a few years off in the future, but they are coming fast and the time to begin preparing yourself and your organization for this is now.

To survive, you will need to learn how to “Jump the Curve.”

One thought on “Take a Swim in the Lake of Tomorrow”