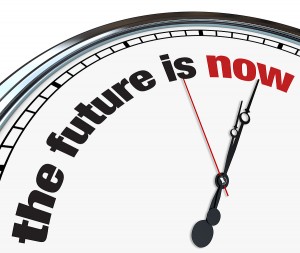 Last year, Simon Anderson, one of my favorite futurists–and a reverse mentor of sorts—said something that really resonated with me. He said, “2013 is the year the future arrived.”

In a literal sense, the future will always be, well, in the future; but let me provide you a glimpse into what Simon was driving at:

On April 16, MD3 announced a successful multi-million dollar Kickstarter campaign to build a 3-D printer for $299. To understand how revolutionary this may be, it helps to understand that just a few years ago 3D printers cost $100,000 and were owned and operated by only the largest companies in the world.

The same day, Amazon revealed it’s cloud computing services would be slashed by 40 percent. Why? Because continued advances in data storage make it possible for Amazon and other cloud providers to offer virtually unlimited data storage for pennies.

On Monday, Google announced the acquisition of Titan, a solar-powered drone company. Google’s purpose is to use Titan’s technology to help deliver high-speed Internet access to all 7 billion people on the planet.

Last Friday, researchers at Wake Forest announced they had grown human vaginas and successfully transplanted the organs in three patients.(If you’re wondering why a woman would need a vagina, there is a rare disease that leaves a few young women without one.)

The previous week Facebook announced the $2 billion acquisition of Oculus Rift—an impressive and immersive 3-D virtual reality technology. The company was only an idea in a teenager’s head 18 months ago and now it is poised to transform a number of industries, including gaming, education and manufacturing.

Last month, the former president of Yale University, Richard Levin, was selected as the head of Coursera, an online university that is a mere two years old.

Welcome to the future. It has arrived and it’s going to kick your ass if you don’t wake up to the fact that these advances are poised to change and disrupt virtually every industry.

If you are wondering what the first step you need to take in order to prepare for the future, it is this: Become aware of what’s already here today!

Interested in some other thoughts on this subject? Check out Jack’s latest article:

Business as Unusual: How to Prepare for the Coming Decade.