The Future is on the Fringe 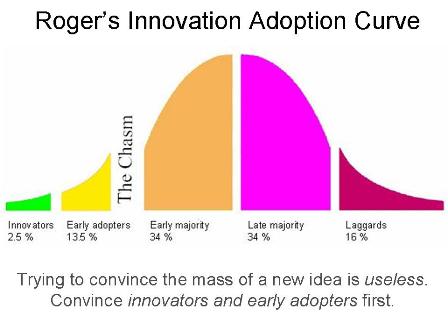 Take a look at the image to the right. It is a visual display of Everett Roger’s famous model of diffusion. I, however, want you to look at it differently. Consider it, instead, “an unlearning curve.” Conventional wisdom tells us that it is safe in the middle. Advertising and marketers frequently target their message toward the “early majority” and the “late majority” in the middle. What they are really doing is focusing on the “average” person.  I say screw that! The future is on the fringe!

The true innovators go after the fringes. If you have a cool new product target it toward the “innovators” or the “early adopters.” Those are the people who really care about your product. If they love it, they will tell their friends and anybody who will listen. They may even improve it for you.

Alternatively, if you want to innovate try looking at the laggards. That’s exactly what Nintendo did when they began considering video games for the elderly. The result was the Wii remote and guess what? Not only did seniors love the easy-to-use hand-held stick so did middle-age parents and even younger kids.

If you want to embrace the future, screw the majority. Focus on the fringes!