Think for the Long-Term with Ben Franklin 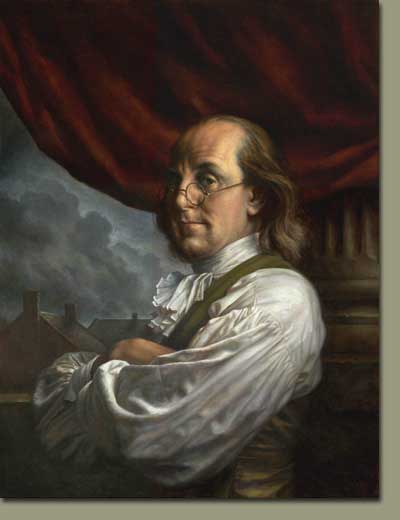 I’m in Bethlehem, Pennsylvania today to deliver the keynote speech at the Ben Franklin Technology Partners annual iX Change conference. The theme of this year’s event is “Leading in an Era of Exponential Growth.”

In honor of Ben Franklin, I’d like to share just one short section of a lengthy article I wrote back in 2006 to commemorate the 300th anniversary of his death. It speaks to the type of vision and leadership society requires today:

It has been said that the greatest disease of modern life is short-term thinking. From business leaders incapable of looking beyond their next quarterly statement to political leaders seemingly unaware of a host of growing societal problems, today’s leaders need to do a better job of designing and shaping their actions for sustainable long-term growth. Consider what Franklin achieved with long-term thinking.

Late in life, Franklin was elected president of Pennsylvania–the precursor to today’s governorship. Rather than accept the $1,000 salary, he directed that the money be split equally between the cities of Philadelphia and Boston and used to finance low-interest loans to help tradesmen receive an education. He noted that in 100 years (after the loans were repaid) the fund would grow to approximately $100,000. He then directed that half the proceeds be used to build public projects and the other half continue to be used as loans. At the end of 200 years he figured the two sums would reach $4 million. (In both instances, Franklin’s projections were remarkably accurate.) At that point, he directed, the funds should be disbursed for educational projects. In Philadelphia, the funds were used to build a science museum and the Franklin Institute (a technology training school), and in Boston they were used to construct the Benjamin Franklin Institute of Technology. All three institutions continue to serve a growing population of students to this day!

Ben Franklin’s remarkable vision serves as a wonderful example of the power of long-term thinking.

Interested in how other lessons from history might help you think about the future? Check out these posts on Lewis & Clark and General George C. Marshall:

Into the Unknown: Leadership Lessons from Lewis & Clark

A Marshall Plan for Unlearning