Thinking Ahead to Tomorrow's Cheaper Future 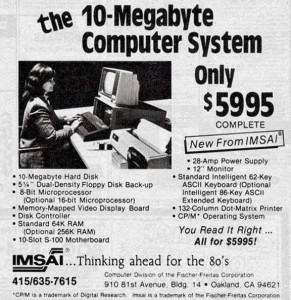 This ad from the late 1970’s imploring its readers to “think ahead for the 1980s” is a wonderful reminder that future has a curious way of getting cheaper and cheaper.

My quick back-of-the-envelop calculation estimates that if your $29.99 32GB jump drive were priced at a level comparable to the late 1970’s it would today cost about $100,000. Another way to think of it is this: That 10MB which cost $5995 three decades ago can today be purchased for less than $2.

This historical footnote is important because many people mistakenly believe that 3D printers, robots, solar cells, fuel cells, a college education and scores of other technologies and products will always remain expensive and out of the reach of ordinary people.

For example, the price of a 3D printer could drop to next to nothing as soon as a 3D printer can print all of the parts necessary to make a copy of itself. Similarly, an Ivy League education might soon be able for free due to the acceleration and growing popularity of Massive Open Online Courses (MOOCs).

Interested in some other “cheap” future scenarios? Checkout these older posts by futurist Jack Uldrich: