Top Ten Books on the Future 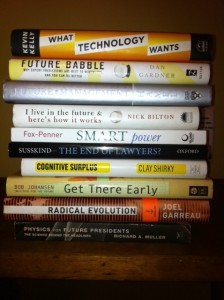 Below is my annual list of top ten books on the future. (Because I believe there is great wisdom in the past, you will note that many of the books were published prior to 2011.) Below, in no particular order, were the books most influential in shaping and changing my thinking this past year.

10. Physics for Future Presidents: The Science Behind the Headlines by Richard Muller. The authors begins by warning readers they may have to “unlearn some cherished facts” and then proceeds to explain how a better understanding of physics—especially in the fields of climate change and energy policy—can lead to a better and smarter future. This is an important book for anyone hoping to shape the future of public policy.

9. Radical Evolution: The Promise and Peril of Enhancing Our Minds, Our Bodies—and What It Means to Be Human by Joel Garreau. “The future is here; it’s just not evenly distributed.” The author begins the second chapter with this famous quotation from William Gibson, and the reason this is significant is because many of the things he was talking about seven years ago (when the book was first published) have moved out from the R&D labs and into mainstream production. If you’re interested in understanding how your future is about to get radical, pick up this book.

8. Get There Early: Sensing the Future to Compete in the Present by Bob Johansen. What if today’s major issues aren’t problems to be solved but, rather, dilemmas that can only be managed? The author makes the compelling point that this is our reality yet he still explains how we can apply foresight to shape strategy and innovation and, more significantly, create a better future.

7. Cognitive Surplus: Creativity and Generosity in a Connected Age by Clay Shirky. Did you know the popular website and online encyclopedia Wikipedia has taken over 100 million hours to create? That sounds like an impressive number but here’s another way to think about it: 100 millions hours is the amount of time Americans will spend watching TV commercials—this weekend! One of Shirky’s main points is that because the Internet can enable thousands or millions of people to contribute small amounts of time, money or effort to specific tasks. As a result, some really big and important things will be able to be accomplished in the future. If you’re looking for a reason to be optimistic about technology and the future, read this book.

6. The End of Lawyers? Rethinking the Nature of Legal Services by Richard Susskind. If you’re like me you might pick up the book because the idea of “ending of lawyers” sounds like a compelling idea. That, however, is not the future Susskind sees for all lawyers. He does, though, explain how the nature of their job is already changing—and will continue to do so—in the future. If you are in the legal profession or if you use a lot of legal services, read this book.

5. Smart Power: Climate Change, the Smart Grid, and the Future of Electric Grids by Peter Fox-Penner. Decentralized power sources, low-carbon energy sources, new technologies and new business models will transform the grid of tomorrow in some refreshing and unexpected ways. If you’re in the energy industry or are interested in the future of electricity, check out this book.

4. I Live in the Future & Here’s How It Works by Nick Bilton. Why would a writer for the New York Times (which is what the author is) cancel his own subscription to the paper? The reason is because his future has already changed and he knows it. Whether you’re in the field of advertising, agriculture, education or any and everything between, your future has also changed. This book provides a compelling glimpse into how today’s technology is shaping the behavior of tomorrow’s consumers, customers and communities.

3. The Future of Management by Gary Hamel. In the past, companies frequently benefitted from their customers ignorance. For example, people couldn’t easily compare prices and features between competing products. The playing field has obviously changed and it will only continue to be dramatically transformed in the future. Hamel uses this book to explain how the “technology of management”—as well as it practitioners—need to change with it. This book is a must read for anyone who hopes to continue to manage and lead in the future.

2. Future Babble: Why Expert Predictions are Next to Worthless and You Can Do Better by Dan Gardner. As a futurist, you might think I’d hate this book but I didn’t—I loved it. It’s an unfortunate truth but many people so crave certainty that they are willing to listen to anyone who confidently expresses their ideas or predictions. This is especially true if that person claims to be an expert. The problem is that experts are routinely wrong! More frightening still is the idea that so-called “experts” will be even more wrong in the future. If you want to protect yourself from the snake oil of tomorrow’s “experts,” read this book.

1. What Technology Wants by Kevin Kelly. What if technology isn’t just metal, wires, circuit boards and “smart apps” but, instead, a living, natural system that is pursuing a future of its own? This is a big, important—and, at times, scary—idea but anyone seriously interested in thinking about the future should read this book.

P.S. If you’re interested in my 2011 book, Higher Unlearning: 39 Post-Requisite Lessons for Achieving a Successful Future the price of the eBook is now just $2.99.

My Ten Favorite Books on Unlearning (for 2011)