Unilever’s Compass Points to the Future 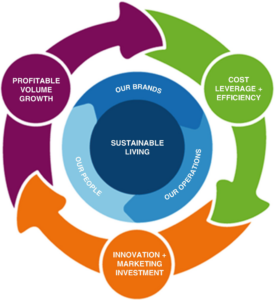 In 2010, Unilever unveiled its “Unilever Sustainable Living Plan” (USLP) and announced the company’s intention to grow its business while also dramatically reducing its impact on the environment. At the time, many environmentalists were skeptical that the company, which manufactures over 400 brands and serves 2.5 billion customers, would make a meaningful change.

A decade later the skeptics were silenced as Unilever reduced its waste footprint per consumer by 32 percent; achieved “zero waste” across all of its factories; reached 100 percent renewable grid electricity; and merged the positions of chief marketing officer (CMO) and head of sustainability into a single position because it realized it couldn’t simultaneously have one person focused on selling products while another worked to reduce the company’s environmental impact.

Unilever is far from perfect and its leaders are refreshingly candid in admitting it has fallen short of its own environmental aspirations in key areas such as reshaping its usage of plastic. The company also acknowledged it still has a lot of work to do in other areas, including ridding its supply chain of deforestation. (A number of Unilever products use palm oil which is a major contributor to global deforestation.) 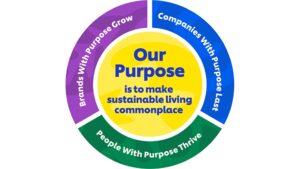 These shortcomings have only fueled the ambitions of the company’s successor plan to the USLP–“Unilever Compass.” The new initiative is centered around three core beliefs–brands with purpose grow, companies with purpose last, and people with purpose thrive. It is a serious attempt to redesign around a commitment to purpose.

Skeptics may be forgiven if they think the focus on “purpose” is little more corporate pabulum, but Unilever’s actions suggest otherwise. As part of “Compass,” the company announced its intention to become “net zero” (meaning it takes as much carbon out of the environment as it contributes) by 2039. This is meaningful because the goal is 11 years sooner than required by the Paris Climate Agreement.

More impressive still is that as part of its commitment to “be better, bolder, and faster,” Unilever is leveraging cutting-edge technologies to achieve its goal to protect the planet. The company has created a partnership with Google Cloud to use cloud computing, satellite imagery, and artificial intelligence to achieve a holistic view of how the company is affecting forests, water cycles, and biodiversity. Unilever intends to use this heightened transparency of its supply chain to reduce its own environmental impact as well as ensure the company’s 70,000 suppliers and vendors are part of the solution. By 2023, Unilever also intends to label every package with its carbon footprint.

The company has even begun creating “nano factories”–about the size of a shipping container–to manufacture small batches of products such as mayonnaise, ketchup, and ice cream. In addition to helping spread wealth across a variety of communities by utilizing more local ingredients, the small factories will also serve to significantly reduce carbon usage by reducing transportation costs because products will be manufactured closer to the end customer.

There are three practical take-a-ways from Unilever’s efforts:

There is one final insight businesses should take a way from Unilever’s commitment to sustainability and purpose. The company is doubling down on these areas of focus because it understands this simple yet often overlooked truth: The modern economy is embedded in–and thus wholly dependent upon–the natural environment. If there is no healthy planet there is no future for Unilever–or any other business. The ultimate bottom-line is this: Sustainability is beneficial for short-term success, but the purpose of protecting the planet for all of its inhabitants is absolutely essential for businesses long-term prosperity and survival.