Who Are the “New Amish” of the Future? You Perhaps? 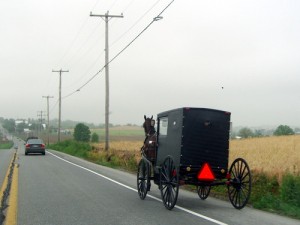 Earlier this week, I traveled to Waterloo, Ontario to deliver a speech on future technology trends. As I left the venue, I encountered an Amish family strolling down the highway in a horse-drawn wagon. The irony of this scene—especially when juxapositioned against remarks on our accelerating future—was not lost on me.

I am not intimately familiar with the Amish or their customs and beliefs, but I respect—and am fascinated by—their decision to forego many of the modern technologies and conveniences you and I take for granted.

As a futurist, however, I am of the opinion that in the not-too-distant future many intelligent and thoughtful people will—like the Amish—define themselves by the technologies they don’t use.

Let me elaborate by asking you a couple of questions:

1. It was recently reported that two stroke victims have successfully had brain-neural chips implanted in their heads that allows them to control (by thought alone!) an external robotic device that then feeds them. If you were a victim of stroke would you use this technology? Now, what if you were healthy and could have a brain neural chip implanted in your head that would allow you to direct a robot to perform routine tasks by thought alone, would you do it?
2. Would you allow your child to use brain-neural technology if it could be demonstrated to help them think faster and better? Does your answer change if you know your child’s classmates are using the technology?
3. Are you comfortable consuming genetically modified crops? Does your answer change if these crops are proven 100 percent safe and can also make you healthier (while as the same time producing larger yields and feeding more people with less water and fewer agricultural inputs)?
4. It is now legal to operate self-driven robotic automobiles in the states of Nevada and California. Do you look forward to the day you can relinquish control of your car to a robotic device with eager anticipation or dread?
5. If a computer or robot (utilizing super powerful computer processors and sophisticated algorithms) could effectively teach and socialize your child, would you be comfortable doing so and would you leave your child alone with the technology?
6. Today, scientists can grow human skin, bladders and kidneys. In the future, it may be possible to grown a human heart from your own stem cells. Would you be comfortable replacing your old heart with a new one?
7. If a new drug were demonstrated to be effective in slowing the aging process would you use it? If one were developed that reverses the aging process would you use it?

Depending upon your answers to these questions, you may be poised to join the “New Amish” of the 21st Century.

P.S. If there other emerging technologies that make you are uncomfortable or don’t think you’ll personally use in the future? I’d love to hear your thoughts.

2 thoughts on “Who Are the “New Amish” of the Future? You Perhaps?”