Driving Faster into the Future with Supercomputers 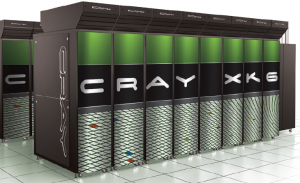 “Titan will be used for a variety of important research projects, including the development of more commercially viable biofuels, cleaner burning engines, safer nuclear energy, and more efficient solar power.”

So states a recent press release from Cray announcing the creation of a new supercomputer capable of between 10 and 20 quadrillion calculations per second.

Remember: Our tools are also getting exponentially more powerful. One implication of this is that any field aided by the creation of faster computers–be it biofuels, solar, cleaner burning engines, or nuclear energy–is that breakthrough developments are closer to being achieved than is generally appreciated.

To better understand this point recall the lesson of the lily pad.