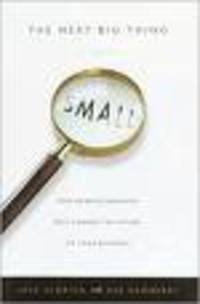 In 2003, I wrote the book, ”The Next Big Thing is Really Small: How Nanotechnology Will Change the Future of Your Business.” In it, I outlined the many ways in which nanotechnology will impact the pharmaceutical industry in the near future. Recently, researchers at Children’s Hospital in Boston have uncovered a method of reviving a once-promising cancer drug, TNP-470—which was cancelled in the mid-1990’s due to concerns over toxicity.

The problem of toxicity is not a new one to the pharmaceutical industry. In fact, it is a big reason why so many early stage drugs fail to make it to market.

This vexing problem may soon be partially alleviated due to advances in nanotechnology. One advantage of reformulating drugs at the nanoscale is that they are water soluble and, as such, don’t require the solvents which so often cause nasty side-effects in patients.

Another application being employed from the nanotechnology bag of tricks is to use nanoscale platforms such as micelles and dendrimers to prevent drugs from crossing the blood-brain barrier. In this fashion, older drugs may be reformulated so as to prevent certain drugs from wreaking havoc on the human brain. (This was one of the problems with TNP-470).

The pharmaceutical industry has invested billions of dollars developing promising drugs. Unfortunately, most developmental drugs end being shelved when it is found they cause some unintended consequence. Nanotechnology holds the promise that a handful of older drugs may now be revisited. Some may even find their way to the commercial marketplace.

With a single drug’s ability to add billions of dollars to a pharmaceutical company’s bottom-line, it is time many of them begin turning their attention to nanotechnology. It’s a small technology, but it could pay big dividends. All the industry needs to do is unlearn the idea that just because something didn’t work in the past, that doesn’t mean that it is necessarily doomed to fail forever.

Does the Pharmaceutical Industry Also Need to Unlearn