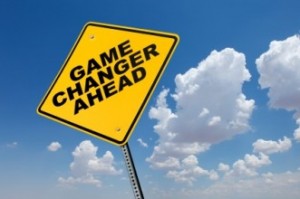 We live in amazing times and our world is about to become even more amazing in the near future due to a plethora of game changing technologies. To understand why, it first helps to consider just a few of the technologies and trends that did not make my list: 3D printers, flying drones, low-cost robotics, insanely fast gigabit Internet speeds, cheap cloud computing capability, artificial intelligence, cognitive computing, affordable gene sequencing, mobile medicine, collaborative consumption, high throughput computational materials design, gene therapy, clean water technologies, new social media platforms, self-repairing materials, tidal power, fusion, printed meat and private spaceflight. This is not to imply the aforementioned aren’t “game changers” in their own right, it’s merely to suggest there are others with greater potential.

Here are ten “game changers” that will significantly affect how we live and work in the coming years:

1. Massive Open Online Courses (MOOC’s). Coursera, edX and Udacity are just a few of the online platforms now offering free, high-quality educational courses over the Internet. MOOC’s will not only profoundly transform the field of higher education by flipping its’ centuries old content delivery methods and credentialing models on their heads, it will also bring quality education to anyone with access to a smartphone and high-speed Internet connection—which, by decades end, will be virtually all of the planet’s seven billion inhabitants. This revolution may spur entrepreneurialism and economic development and, in turn, these traits might create educational and economic empowerment—especially among women—that could manifest itself in meaningful political reform across the globe as these newly empowered individuals demand a greater say over their future.

2. Low-Cost, Affordable and Distributed Clean Energy. The potential of solar and fuel cell technology has been widely predicted for years but both technologies finally appear poised to deliver on their promise of revolutionizing the world of energy. New materials such as perovskites could radically drop the price of the basic building material for solar cells, while advances in printable flexible solar cells could further lower the manufacturing cost. This combination makes it plausible that millions of rooftops will soon be able to affordably convert massive amounts of solar power into energy. Related advances in nanotechnology make it likely that windows and building materials will also become solar collectors. And when the sun isn’t shining, homes and offices will be able to generate back-up power because of breakthroughs such as Redox’s desk-sized fuel cell that may power a single home with little more than water, oxygen and a modest amount of natural gas. The implication of these game changers ranges from dramatically reduced carbon dioxide emissions (and, perhaps, lowering the risk of global climate change) to disrupting the long-standing business models of the coal, nuclear, oil and gas industries.

3. Graphene. Thanks to the discovery of graphene in 2004, the revolution in clean, affordable and sustainable energy may be further facilitated because this new wonder material could allow for the development of advanced battery technology capable of safely, effectively and affordably storing the excess energy produced from the solar cells, fuel cells and wind and tidal turbines. Additionally, due to its super-conductive properties, graphene may allow electric vehicles to be recharged in less than a minute, and, because it is so thin and malleable, graphene could also replace silicon in next-generation computers. The material therefore holds the potential of ushering in an era of high-performance, long-range electric automobiles as well as flexible electronics.

4. Wearable Technologies. One of the fields to benefit from flexible electronics will be wearable technology. Currently, Google Glass and devices such as FitBit, Jawbone and Nike’s Fuel Band best represent this trend but next-generation materials and sensors may take things to a deeper and more personal level. Soon, people will be using wearable technology to pay for items with a swipe of the wrist (as is already happening at Disneyland) or turning off lights by sensing when a person leaves a room. It is likely wearable technology will soon become so small and unobtrusive that it will be incorporated into our clothing and, eventually, inside the human body where it could diagnose cancer, heart attacks and scores of other diseases before they ever occur.

5. Thought-Controlled Computing. Not content with incorporating technology inside the human body, innovative researchers have already successfully implanted a brain-neural chip inside the brains of stroke-victims and paraplegics. The technology allows the users, by thought alone, to control a robotic prosthetic device attached to their bodies. On a more practical level, a similar technology has already allowed a man who lost use of both legs in a motorcycle accident to walk up all 104 floors of the Willis Tower in Chicago. In the not-to-distant future, thousands of injured soldiers could also benefit from the technology, as might millions of Baby Boomers who could use the technology to offset the affects of aging and thus remain independent for years longer than is currently possible.

6. Regenerative Medicine. Before hordes of seniors need to rely on brain-neural prosthetics, they will first be able to retain the use of their own bodies for prolonged periods due to the extraordinary advances taking place in the field of regenerative medicine. Researchers and scientists, using three-dimensional printers, biomaterials and cells, have already created skin, bladders and kidneys and, more recently, an innovative stem cell therapy procedure was performed to repair a damaged human heart. Longer term, the ability to grow a new heart or lung is possible. This would not only change the game for the millions of people presently waiting for organ donations, it may also disrupt the multi-billion dollar global medical device industry as the need for stents, pace-makers and other implantable treatment devices is rendered obsolete.

7. The Internet of Things. By the end of decade, Cisco estimates 50 billion physical devices will be connected to the Internet. Others speculate the figure could be substantially higher. The game-changing potential of the Internet of Things (also sometimes referred to as the “Industrial Internet”) has been calculated by General Electric to be a $15-$30 trillion business opportunity in the coming decade because of sensors’ ability to connect billions of everyday objects in a manner that enables the user to achieve new levels of safety, comfort, convenience and efficiency. Imagine a sensor connected to your automobile that informs a local government agency of the precise amount of carbon dioxide a car is emitting into the atmosphere and then the individual is taxed for his or her individual contribution to climate change and one can begin to get a glimpse—both positive and negative—of the Internet of Things’ potential to alter human behavior.

8. Cryptocurrency. In the past year, the value of Bitcoin—a peer-to-peer, decentralized, digital currency—has fluctuated in price from a low of $13.50 to a high of $1242 (at the time of this writing). It’s too early to tell whether Bitcoin has real staying power or if it’s just the latest in a long line of technology bubbles but what is clear is that the tomorrow’s digital economy will make use of some form of cryptocurrency—be it Bitcoin, Litecoin, Peercoin or some other as-yet-created cryptocurrency. The reason cryptocurrency is a game-changer is because the number of “coins” has a fixed upper limit and, therefore, can’t be manipulated by a central authority. (This imbues it with attractive anti-inflationary powers.) Cryptocurrencies have the added benefit of very low transactions fees, which makes them an ideal platform for micropayments and transferring money. For these reasons, a new cryptocurrency—assuming it achieves a deep level of trust among its users—could greatly facilitate global commerce, while fundamentally transforming how banks, central bankers, merchants and consumers think about and use money.

9. Autonomous Automobiles. Already legal in three states—California, Florida and Nevada—Google, BMW, Toyota, Audi, Nissan and Ford have publicly stated autonomous (self-driven) automobiles will be feasible by 2020. The game-changing potential of this technology does not simply reside in relieving drivers of the burden of driving; it could fundamentally alter human behavior and shape how cities and communities are designed. As autonomous vehicles become more popular, fewer people—especially among younger and older people in urban areas who aren’t especially interested in being burdened with expensive car payments, monthly insurance bills or locating parking spots—will find it unnecessary to own a vehicle because calling up an autonomous vehicle on demand will be quick, affordable and convenient. Even consumers in suburban and rural areas may forego owning a second car and, instead, rely on autonomous vehicles for those times when a second car is needed. By Google’s estimate, autonomous vehicles could replace 80 percent of today’s automobiles (the average vehicle is estimated to sit idle for 22 hours a day). With fewer cars are on the road, traffic congestion could be substantially reduced; and city planners and architects will be free to re-configure much of the public space currently devoted to parking.

10. Quantum Computing. Lockheed Martin, Google and NASA are currently in possession of quantum computers and are testing the technology’s ability to solve a number of “optimization” problems—problems for which there are a single, best solution. If successful, quantum computing’s ability to solve challenges ranging from the design of new life-saving drugs to the creation of the strongest, lightest and most affordable material for a next-generation airliner may prove to be a proverbial walk-in-the-park. The game-changing potential of quantum computing is that it could be the ultimate game-changer because it could speed up the discovery, creation and evolution of a myriad of new products, materials and technologies. It has even been speculated that a quantum computer may someday answer the age-old question of whether or not humans are alone in the universe.

And therein lies the most amazing aspect of these game-changing technologies: they are engaged in a virtuous cycle whereby advances in one field accelerate advances in another. For example, MOOC’s may help educate the next great quantum physicist who, in turn, creates a company (funded entirely by anonymous donations of a new cryptocurrency) that manufactures a practical universal quantum computer that is used to discover a new fuel that makes spaceflight affordable to the masses.

The game isn’t just changing, it’s changing at an accelerating velocity. Tomorrow could figuratively—and, perhaps, literally—be out of this world.

Jack Uldrich is a renowned global futurist and the best-selling author of 11 books. He is a frequent guest on national media and regularly appears on the Science Channel’s new television program, “FutureScape.” He is the founder and “chief unlearning officer” of The School of Unlearning—an international change management consultancy.