The Five Trends Shaping the Future of Cities 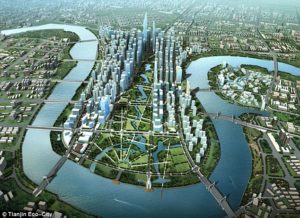 The science fiction writer William Gibson once wrote: “The future is here. It just isn’t evenly distributed.” It’s a powerful insight because it implies that savvy business people, farsighted political leaders and even average citizens can discern the future if only they heed today’s emerging trends. Five current trends, in particular, appear poised to transform the cities of tomorrow.

In February, Amazon introduced “Echo,” a new artificially intelligent platform that allows users to access the Internet using nothing other their voice. That same month Facebook unveiled its new “Chatbot” platform which similarly uses artificial intelligence. The developments are noteworthy because soon schools, businesses and city hall will be able to create artificially intelligent agents that can serve students, customers, and citizens in a variety of accessible, affordable and innovative ways.

In March, the city of Cincinnati announced it was connecting all of its trash cans to the Internet. Other cities are doing the same with their water pipes, streetlights, and buildings. The actions might appear small but they are part of the Internet of Things “Smart Cities” initiative and the trend holds the potential to save cities hundreds of thousands–if not millions or potentially even billions–of dollars on an annual basis. (For instance, just imagine if the city of Flint, Michigan would have had sensors capable of detecting lead in its water pipes?)

In April, Beverly Hills announced it was considering using autonomous–or self-driving–vehicles as its primary mode of public transportation. The idea might sound farfetched but in September Uber began giving people rides in self-driving vehicles in Pittsburgh and, in October, Budweiser used an autonomous truck to deliver 50,000 cans of beer to Colorado Springs. The future of public transportation may be different than most people expect because of exponential advances in autonomous driving technology.

In June, Facebook conducted the first flight of Aquila–a solar-powered drone designed to deliver affordable high-speed Internet access everywhere on the planet. Google, SpaceX, and AT&T are also making plans to deliver 5G (10-gigabit download rates) by the end of the decade. Among many other possibilities, this suggests that hospitals will soon be able to begin to deliver innovative telehealth solutions directly into the homes of city residents such as Mercy Hospital is now doing in St. Louis.

In July, Pokemon Go exploded onto the urban scene. To the casual observer the game might seem silly but it represents the first wide-scale use of augmented reality. As the trend using of digital data and mobile devices to engage people in unique ways continues to mature and proliferate, everything from marketing and education to both citizens and tourist alike may navigate city streets will soon be transformed before our very eyes.

Finally, in the last week of October Elon Musk unveiled a sleek, new attractive solar roof. It, along with the news that Burlington, Vermont is now powered 100 percent by renewable energy means that other cities will soon have a more sustainable, energy independent future as its citizens to begin producing more of their own clean, renewable power.

Other trends in 3D manufacturing, urban agriculture, the “sharing economy” and online education will also continue to transform cities in the coming years. But, in the final analysis, it is important to remember that the citizens of any city are not passive actors in this rapidly unfolding drama. The future is shaped by the actions that individuals take today. The question before every citizen then is a simple one: What kind of future do you want to create for your city?

Jack Uldrich is a best-selling author and a leading urban futurist. His forthcoming book is Business as Unusual: The Big AHA!

2 thoughts on “The Five Trends Shaping the Future of Cities”