In one of those rare “small world” moments, I bumped into an old fraternity brother in the airport in Florence, Italy while on vacation this summer. He is now an ophthalmologist and he knew I was a futurist, and during the course of our conversation, he said to me, tongue-in-cheek, “Oh, I can tell you the future: It’s going to look exactly the same as today.”

1. Mobile Diagnostic and Communication Tools: EyeNetra, a Boston-based start-up, is developing a low-cost app designed to replace a $5,000 auto refractor, and in September, researchers at Massachusetts Eye and Ear developed a simple technique of fundus (retinal) photography using an iPhone and an inexpensive app (Fundus cameras can today cost from tens to hundreds of thousands of dollars). This same month, a surgeon wearing Google Glass performed the world’s first surgery and, as this new video suggests, the potential for Google Glass and other “virtual reality augmentation tools” to transform how future ophthalmologists will be trained in the near future could be immense. Furthermore, as online educational and professional networking platforms such as EyeTube.net and EyeRounds.org begin uploading “augmented” videos practicing ophthalmologists will also be able to improve their surgical skills. (As impressive as Google Glass is as a technology, it won’t stop developing. In fact, as this article suggests, researchers in South Korea are already attempting to put “Google Glass into a contact lens.”)

2. Predictive Analytics/Big Data: Sloan-Kettering, one of the world’s leading cancer centers, recently “hired” Watson, IBM’s powerful supercomputer, to help diagnose cancer faster, more affordably and more accurately. In the near future, similar tools may help diagnose patients for various eye-related ailments. “Big Data” and predictive analytics may also help identify patients most at risk for not taking their medication properly—a problem estimated to cost the U.S health care system $300 billion a year. Once identified, however, ophthalmologists and other healthcare professionals will be able to take targeted action to help these at-risk individuals better adhere to their drug regiments.

3. Pharmaceutical Advances: It has been estimated there are upwards of 500 eye-related pharmaceutical clinical trials currently under review. Many of these treatments will ultimately prove ineffective but if just a small percentage are successful they could be “game changers.” Pharmaceutical solutions for presbyopia, dry-eye and myopia are real possibilities.

4. Robotics: Femtosecond laser surgery for the removal of cataracts is already here. The technology will only become better and more affordable in the future. As it does, robotics may soon be used in vitreoretinal surgery and various other procedures. Startling advances by entrepreneurial ophthalmologists using open-source methodologies and off-the-shelf technology to create sophisticated, low-cost surgical robots such as Raven may even point to an affordable robotic future. Longer term, advances in microsurgical devices point toward a bolder—and far less invasive—future for eye surgery.

5. Genomics: The cost of sequencing the human genome is plummeting. As it does, society will come to a better understanding of the roles various genes play in the development of diseases such as diabetes and retinal degeneration. This new understanding may lead to earlier and better treatment of eye-related ailments like diabetic retinopathy and retinitis pigmentosa. 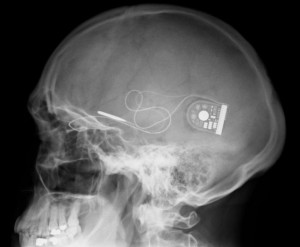 6. Retinal Prosthetics: In July of 2013, The Food and Drug Administration (FDA) approved the use of Argus II, a bionic eye; and in September, European regulators approved the use of the Atlas IMS—the first fully implantable, wirelessly controlled retinal prosthetic. At the present time both devices cost approximately $100,000 and allow patients with retinitis pigmentosa to see in black-and-white. In the near future, as ever-more electrodes are packed into the device, the technology may allow the users—including those suffering from age-related macular degeneration—to see more clearly and in color. (If you were alive in the 1970’s and remember the video game Pong, I’d encourage you to think of Argus II and Alpha IMS as being where Pong and the field of videos games was in the late 1970’s—the technology is only going to get better, faster, cooler and more affordable.)

7. Regenerative Medicine: The first successful transplant of a biosynthetic cornea occurred in 2010. Since that time, breakthroughs in biotechnology, material science and 3D printing have accelerated the field and, in the not-too-distant future, biosynthetic corneas could help restore sight to the vast number of people who are currently waiting for a donated human cornea for transplantation.

8. Nanotechnology: Researchers at the University of Dayton Research Institute recently created “fuzzy fiber” carbon nanotubes. This could be a significant breakthrough for the treatment of glaucoma because the “fuzzy fibers” are biocompatible and can help prevent the build-up of fibroblasts. Other breakthroughs in nanotechnology include using nanoparticles for gene therapy—such as this one for the treatment of macular degeneration—and are quite exciting.

9. Stem Cell Advances: Earlier this year, the company Advanced Cell Technology announced an innovative stem cell treatment it had developed had corrected the eyesight of an individual with 20/400 vision to 20/40. The company is equally excited about the possibility that stem cells can soon be used to treat Stargardt’s macular dystrophy.

10. Neuroscience Advances: In August, researchers at MIT and the Max Planck Institute announced they had mapped the 950 neurons in the retina of a mouse. It is only a matter of time before the neurons in the human retina are similarly mapped. When this happens ophthalmologists understanding of photoreceptors, horizontal cells, bipolar cells, amacrine cells and ganglion cells may lead to a new and deeper understanding of the human eye.

Like all forecasters and futurists, my ability to “see” into the future is at best fuzzy, yet when I research and study these ten trends I can’t help but forecast a significantly different future for the field of ophthalmology.

Jack Uldrich is one of the world’s leading health care futurists and has addressed hundreds of healthcare-related organizations around the world, including United Healthcare, Boston Scientific, Wolters Kluwers and the American Academies of Neurology, Audiology and Kinesiology.