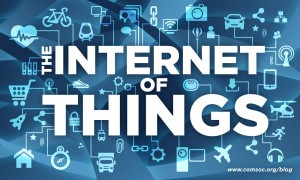 A common and popular vision of the Internet of Things—which I loosely define as the connection of billions of physical objects to the Internet through the use of low-cost sensors—is the example of an alarm clock smart enough to read your daily schedule, review the latest traffic and weather reports and then communicate this information to your coffee maker in such a way that you’ll be able to maximize your sleep while still getting to work on time with a piping hot cup of java in your hands. This vision of the future is entirely possible but it sells short the true potential of the Internet of Things (IoT).

A more comprehensive vision is one where a world of inexpensive sensors—embedded in your eating utensils, pajamas, mattress and home lighting system, etc.—work in concert to monitor and measure everything from your diet to your sleep behavior, and then use this information to modify your future actions in beneficial ways. For example, the system could tell you to reduce the amount of caffeine you consume after 6pm as well as train your bedroom lights to gradually increase their brightness the precise moment you come out of REM sleep.

The two scenarios might not seem that different but I’d argue that they are and the difference hints at the broader potential of the IoT. In the first example, sensors are collecting current information to modify present behavior. In the latter scenario, a myriad of sensors still collect information from present activities and actions but they now combine it with detailed records from your past behaviors to help shape a healthier, happier and more productive future. In other words, you’ll still get to work on time but in the future you’ll do it in a way that not only leaves you feeling refreshed for the day but healthier for the long term.

Here then are nine additional and unexpected ways the Internet of the Things may modify the future: 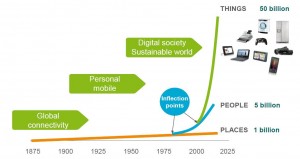 Such visions may seem far off, unlikely to occur or, perhaps, even undesirable. A good way to think about where the IoT is headed is to contemplate where GPS technology was at the turn of the century. In 2000, President Clinton signed an executive order allowing GPS data to be used for commercial purposes. At the time, the accuracy level wasn’t very good and everyday uses—such as navigation systems capable of telling you turn right in 50 yards—seemed like science fiction. Today, such uses are commonplace and deeply valued by many users. Another way to consider the future of the IoT is to contemplate where artificial intelligence—in the form of technologies such as Apple’s Siri or Google Now—were in 2012. Just two years after their introduction the technology has already become the equivalent of an affordable personal assistant for many people, and it’s getting smarter every day. (Expect by the end of the year for artificial intelligence to be able to book flight, hotel and rental car reservations for you). In this same way, we are now just in the early days of the Internet of Things and as it matures its new capabilities will be astonishing. Don’t just expect to told where to turn or when to book your flight, expect to have these actions taken for you before you even think or know to take them yourself.

Jack Uldrich is a renowned global futurist, popular keynote speaker and best-selling author. His website is www.jumpthecurve.net and he can be reached at [email protected]