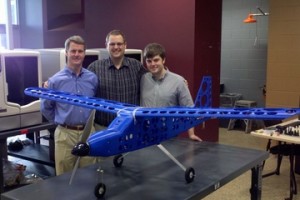 Yesterday, it was reported that two students at the University of Virginia had created a 3D-manufactured airplane capable of cruising at a speed of 45 miles per hour. More impressive was the fact that the students created the 6.5 foot airplane in four months at a cost of $4,000.

To appreciate the significance of this milestone, it helps to understand that such a plane could have cost $250,000 and taken two years to complete just a few years ago.

The field of 3D manufacturing is accelerating as I suggested last week. As further proof of this fact, consider that Shapeways just opened the world’s first 3D manufacturing plant in New York City last week. The company intends to employ 50 designers. As Mayor Michael Bloomberg said at the ribbon-cutting ceremony, “This is the future of our city.”

Listen Up Carefully: You Can Hear the Future of Manufacturing