Into the Unknown: A Historical Metaphor 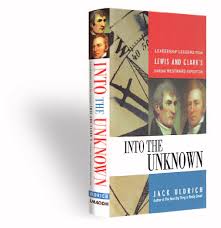 In 2004, I wrote the book Into the Unknown: Leadership Lessons from Lewis & Clark’s Daring Westward Expedition. One of my favorite stories—because it has so much relevance for today’s business leaders —occurred in early June 1805.

On June 2, 1805, Lewis and Clark approached a fork in the Missouri River. During their consultations with the Indians the previous winter nothing had been mentioned of this second river. It was, however, critical that the Corps of Discovery follow the true Missouri River. If they didn’t, they were unlikely to reach and then successfully pass over the Rocky Mountains before winter. This setback would have jeopardized the entire mission.

Lewis and Clark split their team up and sent one group up the north river and a second group down the south river. After three days, both teams returned and were still unsure as to which river was the true Missouri.

Lewis and Clark being the good leaders that they were then split up. Meriwether Lewis traveled north and William Clark went south. After a few days the two men returned and they still weren’t sure.

While they were away something very interesting occurred. All 30 members of the team determined that the north river was the true Missouri. They reached this decision the following way: For the past year, the Corps of Discovery had been traveling up the Missouri River and the water was “warm, slow, muddy and brown.” The water of the north river was also “warm, slow, muddy and brown,” therefore they reasoned it was the true Missouri. It is the equivalent of saying that “Tomorrow is going to be pretty much like yesterday.”

Lewis and Clark conferred among themselves and reached a far different conclusion. In the face of complete opposition, they announced the south river was the true Missouri. They reasoned as follows: At some point the snow from the mountains needed to melt and when it did it would create a river that was cold, fast and clear.” Those characteristics matched the south river and, as history demonstrated, the two captains made the correct decision.

My point is this: Many, if not most, people think that “tomorrow will be pretty much like yesterday.” From my perch as a professional futurist, I see the trends in biotechnology, nanotechnology, information technology, RFID, social networking and robotics (to name but a few) are accelerating and I know that tomorrow is going to be radically different then either yesterday or today—and we need more leaders with the courage to unlearn their old ways and, instead, chart a new course into the unknown.