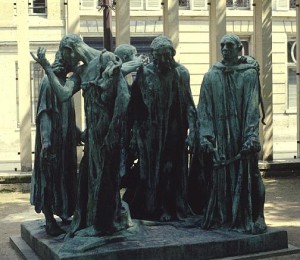 This past spring I had the pleasure of visiting Paris with my family. One of the highlights of the trip was a visit to the Rodin Museum. To my surprise, I came away enjoying Rodin’s “Burghers of Calais” far more than his most famous piece “The Thinker.”

When Rodin created the piece for the city of Calais, it was met with widespread disapproval. First, Rodin did not put the burghers on a pedestal which was (and still is) typical of the how we prefer to portray our heroes. Instead, he put them at ground level. Rodin also depicted great anguish on the faces of each of the six heroes. Again, this is not typically how we prefer to think of our heroes. We like to think that they made their heroic decisions easily and without consideration of the consequences.

Yet, really, wouldn’t we all be better off if we thought of heroes more as Rodin did: People who lived not “on pedestals” and made their heroic decisions in spite of the anguish they felt? In this way it makes real heroes seem more like average people–and, thus, something each of us is capable of achieving if called upon.

I’m Being Followed By a Moon Illusion