10 Surprising Ways Nanotechnology is Climbing into Your Life 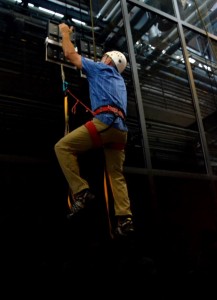 Ascending a 25-foot sheet of glass using nothing more than a pair of hand-held, gecko-inspired paddles might not appear the most impressive use of nanotechnology but this real-world advance aptly demonstrates how quickly the field of nanotechnology is climbing into our lives. Below are ten additional examples of how nanotechnology is already transforming the world around us, followed by 10 ways it may help society scale even greater heights in the near future.

#1: Nanotechnology Cleans Up Its Act. Nissan recently developed a self-cleaning car that repels water, oil, dust, dirt, mud and grit and frees it’s owner from ever having to visit a car-wash again. The real potential of self-cleaning materials, however, lies in their ability to render a variety of urban pollutants harmless. The Jubilee Church in Rome, for example, has been using titanium dioxide nanoparticles to catalyze nitrogen oxide—a byproduct from auto emissions—to become known as “the smog eating Church of Rome.” As thousands of additional buildings employ similar coatings, heavily polluted cities such as Beijing may soon be breathing easier thanks to nanotechnology.

#2: Product Heal Thyself. In late 2013, Samsung unveiled its G Flex smartphone which utilizes advanced nanomaterial to imbue the phone’s casing with the ability to self-heal if scratched., In the near future, a number of other products may also be able to self heal, including self-healing concrete—an advance that would be a boon to transportation officials and taxpayers alike as the number of road and bridge repairs are reduced.

#3: 30-Seconds to Splashdown. Discovered only ten years ago, graphene is already being investigated for its potential to reduce the time it takes to charge an electric vehicle from 4 hours to less than 30 seconds. Perhaps even more revolutionary is the work of MIT researchers who are investigating how to exploit graphene’s strength to make desalination technology a practical and affordable option for generating vast amounts of clean water for drought-stricken areas around the world.

#4: Cancer in the Crosshairs. Four decades after President Nixon famously declared “war on cancer,” nanotechnology appears to finally be taking the battle to the disease. Researchers at the University of Montreal have recently developed a nanosensor that can detect the presence of cancer cells by discerning minute variations in pH levels. This leads to the possibility that lipid-based nanocapsules—such as the ones being developed at the University of North Carolina and North Carolina State University—might soon be able to smuggle a cancer drug directly inside cancerous cells. The advantage of this approach is that instead of poisoning both healthy and diseased cells with chemotherapy (a common strategy today), in the future oncologists may be able to single out and slay just the cancer cells with precision-like accuracy.

#5: The Opposite of an Out-of-Body Experience. Harvard scientist Charles Lieber, a leading nanotechnology researcher, has developed an innovative nano-coating that might allow for a number of small implanted medical devices to safely reside inside the human body for extended periods of time. This seemingly modest advance could facilitate a revolution in how society detects, prevents and treats a variety of chronic ailments, including hypertension, heart disease and diabetes. Researchers are also rushing to develop nanoparticles, nanocapsules and other nanobiotechnology-based delivery methods that can cross the blood brain barrier. If successful, treatment options for Parkinson’s, Alzheimer’s and brain tumors could become commonplace.

#6: Make Love, Not War. The Bill and Melinda Gates Foundation has granted $100,000 to the University of Manchester to use advanced nanomaterials to develop a stronger, lighter condom. According to its creators not only is the condom unbreakable; it is so thin that it reportedly doesn’t diminish the experience of the user. Meanwhile, at the University of California, Santa Barbara, researchers have developed a sensor that exploits microfluidic nanotechnology to detect bombs and other explosives with a level of sensitivity greater than that of the best-trained bomb-sniffing canine. The end result of these advances is that it’ll be easier to make love and harder to wage war.

#7: Seeing a Brighter Future. Researchers at Sandia National Laboratories, Rice University and the Tokyo Institute of Technology have exploited the unique properties of carbon nanotubes. They are working to develop a new terahertz detector that may soon lead to significant improvements in airport passenger screening, medical imaging and food inspection. At the same time, a team of researchers at the University of Utah are actively investigating how to exploit various nanoparticles to effectively administrator gene therapy. One of the more promising opportunities stemming from this research is the application of tailored nanoparticles to combat macular degeneration—a problem that affects millions of people worldwide—by delivering genes directly into patient’s retinas.

#8: Down on the Farm. Michigan State University researchers have created a new nanofilter that not only helps keep phosphorus out of groundwater but also re-uses the recaptured phosphorus for the production of new fertilizer. The result is a more sustainable approach to the use of fertilizer. Longer term, nanotechnology might also be able to help feed more people. Today, a vast amount of grain is lost due to insects. Researchers at the University of Adelaide are now actively exploring how to uses diatoms—sometimes referred to as nature’s nanofabrication factories—to create novel chemical-free and resistance-free methods for protecting stored grain from insects.

#9: The Dentist Will See You Now. In South Korea, scientists at the Korea Advanced Institute of Science and Technology have developed nanotube sensors that allow for portable real-time breath tests on smart phones. By some estimates, your dentist could detect the presence of over 150 different diseases and ailments from your breath alone. Meanwhile, researchers at the University of Iowa have created nanoparticles capable of delivering bone-producing instructions into cells genes. The end game is to re-grow bones so that dental implants for craniofacial defects are no longer necessary.

#10: Power to the People. Bandgap Engineering, a Massachusetts’ based startup, is developing nanowire-based solar cells that could eventually generate twice the amount of electricity as conventional solar cells by enhancing the amount of light each cell can absorb. If successful, the technology will make solar power as affordable as electricity produced by natural gas and coal. Other nanotechnology-related developments–such as the Department of Energy’s creation of a new nanomaterial that can affordably duplicate the capabilities of platinum by efficiently facilitating the catalytic reaction between hydrogen and oxygen to produce electricity–might finally make fuel cells a practical method for powering individual homes as well as automobiles.

In ways small and big, nanotechnology—the science of the small—is well positioned to have an outsized impact on the world around us. If you need further proof, look around. Nanotechnology is already inside your smartphone and might soon be inside your body battling cancer. Who knows it may even be outside your window at this very moment in the form of a gecko-like human scaling a self-cleaning, nano-enhanced solar window.

Jack Uldrich is a renowned global futurist, popular keynote speaker and the best-selling author of 11 books, including The Next Big Thing is Really Small: How Nanotechnology Will Change the Future of Your Business. He can be reached at 612.267.1212 or [email protected]