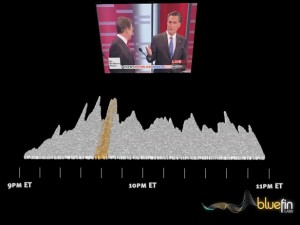 Late last year, I released my annual list of predictions for 2012. In Trend #3 on “Augmented Political Reality” I wrote: “a new wave of social media political consultants will monitor live Twitter streams and use the feedback to adjust candidates’ teleprompter speeches in real time.”

To this end, this article (Why Viewers Could Soon Control Super Bowl Ads) explains, among other things, how ABC News is using the real-time feedback of social media to adjust its news coverage. One of the applications being considered is using viewers’ Twitter responses to adjust what questions its moderators use in the upcoming 2012 presidential debates.

Now, it’s not exactly as I wrote, but is the prediction I discussed that far off? Probably not.