The Future of the Grocery Store 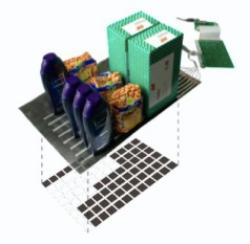 With technology it is sometimes easy to get ahead of reality. For instance, regarding the future of grocery stores, it is entirely possible to imagine how the confluence of wireless technology, RFID, robotics and virtual reality technologies could lead to a future scenario whereby people will browse a “virtual” store aisle from the comfort of their home computer and their selections will be wirelessly transmitted to a robot in a large warehouse which fetches each individual item (using RFID) and those goods will then be delivered to the person’s home.

The above scenario is feasible, but it isn’t yet practical. What is practical are new technologies such as ”intelligent foam”—which gives surfaces sensing abilities. For a grocery store, this would mean that it could know whenever a certain item had run out of stock. According to this article, researchers in Europe are already deploying “intelligent foam” in at least one store and, unlike RFID technology which is still relatively expensive, this “intelligent foam” costs about one dollar per square yard to install.

Beyond that, such a technology could also be used to sense foot traffic in a store (by embedding it in the floor) and this information could, in turn, be used to determine if more employees need to be deployed at checkout lines. (Although, just as self-service has become the norm at gas stations, I think more and more grocery stores will also be going to a self-service model … so perhaps this isn’t the best example.)

Retailers are Beginning to Jump the Curve

Pump It Up: Retailers Use Google to Bolster Customer Loyalty

Time is Money … So Walk the Escalator

Stronger Than a Speeding Bullet

Jack Uldrich is a writer, futurist, public speaker and host of jumpthecurve.net. He is the author of seven books, including Jump the Curve and The Next Big Thing is Really Small: How Nanotechnology Will Change the Future of Your Business. He is also a frequent speaker on future technology and future trends, nanotechnology, robotics, RFID, innovation, change management and executive leadership to a variety of businesses, industries and non-profit organizations and trade associations.