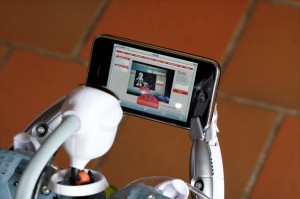 As a professional futurist and forecaster, I prefer to read the newspaper from back to front because I often find the most interesting items are buried on the back pages.

To this end, this past week I stumbled upon this Wall Street Journal article explaining that Foxconn–the massive Chinese manufacturing company that employs thousands of workers to assemble electronic products such as the iPhone–was freezing its hiring in China.

This might appear to be a normal business decision but you might also recall that last year Foxconn announced its intention to add 1 million robots to its “work”force by 2015.

In keeping with the weather forecast metaphor, I’d suggest Foxconn’s “freeze” policy is just the first “front” of its decision to deploy a million robots.

Longer-term, the robots will likely result in the mass layoff of thousands of Chinese workers.

The effect of this decision is harder to predict but one distinct possibility is that disgruntled and unemployed workers will revolt. This, in turn, will cause economic and political turmoil in China.

And, unrest in one of the world’s most powerful and influential economies will impact the wider global economy–which, ironically, likely will be a story you’ll read about on the front page in the not-too-distant future.