Robots to Cause Political and Economic Tension in China 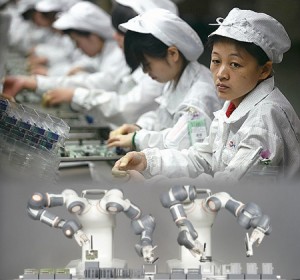 Foxconn, a large manufacturer of computer and electronic components in China, announced recently it intends to increase the number of robots it employs from 10,000 to 1 million–in the next three years!

This is nothing short of astounding and offers yet another example of the power of exponential growth.

Beyond its immediate impact for Foxconn as well as the larger manufacturing community (Foxconn reporting makes 40% of all computers), I’d encourage people to begin contemplating how the advance of robotics could have some very serious second-order impacts on the broader world stage. In particular, I’m concerned that the displacement of thousands (and potentially even millions) of workers in China will lead to wide-scale economic and political unrest in China when these workers become unemployed.

This, in turn, could lead to political reform in China or, alternatively, an authoritarian crackdown.

Either scenario is feasible but the question you must ask yourself if you do business in China is this: How do you factor wide-scale political upheaval into your strategic planning process?