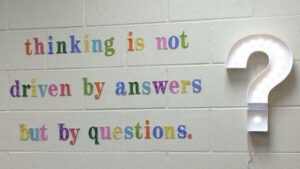 Think in Questions: Here is a question every farsighted business leader should be asking themselves: How might quantum computing affect my business? This article, 8 Ways Quantum Computing is Going to Change the World, provides some good answers. (If you don’t have time to read the article here are the 8 ways: New drug development, the creation of better batteries, predicting the weather, stock picking, processing language, logistics, traffic, and solving complex “optimization” problems).

Think Fast: The pace of change is accelerating. One reason for this is that our tools are getting bigger, better and faster. A few weeks ago I wrote about how the U.S. has a new exascale supercomputer capable of one quintillion calculations per second–this is 1000-fold faster than the supercomputers of 2010. Now, one innovative chemist is using such computers to reimagine the discovery of new materials. (The big take-a-way is this: It used to take months to discover and create a new molecule, now it can be done in days. In the near future, the time may reduced to mere minutes.)

Think Like a Futurist: In 1999, Rolf Jessen wrote an essay almost no one has ever heard about. It was called The Dream Society: How the Coming Shift from Information to Imagination Will Transform Your Business. Jessen was a little ahead of his time but you may want to begin thinking about how “emotion” may become one of your biggest competitive advantages in the near future. If you are interested in this idea, I encourage you to read this article and think about its implications.

Think Historically: Earlier this week, I was in Oklahoma City talking about innovation. Near the end of the talk, I shared with my audience how the printing press lead to creation of a new market for reading glasses because people now had a growing number of new books which they wanted to read. The development of better reading glasses in turn lead to innovations in glass which, indirectly, led to the creation of the microscope and then the telescope. Suddenly, human vision was expanded to “see” both tiny things (such as cells) and large things (such as galaxies.) The point is this: Innovations in one area often lead to innovations in new and unrelated fields.

Think the Unthinkable: As a futurist, one of my responsibilities is to stay open to all that I–and others–DON’T know. To this end, this article discussing how humans could soon talk to whales is quite mind-expanding. Sperm whales have the largest brain of any mammal in the world. They also live in families and are believed to have roamed the planet for somewhere between 5 and 25 million years. It is therefore within the realm of possibility that over this vast amount of time whales have developed a complex and sophisticated language. If the scientists are successful at deciphering the sperm whale’s language (and this is a BIG IF at this point), the implications for how humanity views whales–and our broader natural environment–could be significant. Regardless, the idea that an entire civilization could be swimming below our noses is something fun to think about.

Afterthought: “To have a good idea, you must first have have lots of ideas.” — Linus Pauling