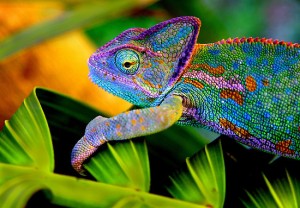 “A foolish consistency is the hobgoblin of little minds.” –Ralph Waldo Emerson

Question #27: What do chameleons do?

They do many things but the one thing they don’t do is change color to match their background. Chameleons do change color in response to changes in light and temperature. They also change appearance when frightened or when attempting to gain the attention of a member of the opposite sex.

This distinction between changing to meet every change in external conditions and changing in response to only those factors critical to one’s long-term well-being or survival is an important one.

From a human perspective, the difference can best be seen in the actions of a “yes man”—someone who too readily modifies his message to match the viewpoints or beliefs of his audience—and a person who changes his mind in response to new information.

There is, for example, a big difference between a lone juror who has reservations about the guilt of the defendant but goes against her convictions and votes “guilty” with the other jurors for the sake of expediency, and a juror who had originally sided with the majority but, when presented with compelling, new information, changes her mind based on the principle of fairness.

The distinction is an important one especially in a society where changing one’s mind has become something of a liability. To this end, how often have you heard a politician skewered by an opponent because they changed position on an important topic? “Candidate so-and-so was for it before he was against it!”

Distinguishing when someone is changing positions for expediency’s sake and when they are doing it as a matter of principle can be difficult but one strategy for avoiding such situations yourself is to “fear commitment” and steer clear of making unnecessary public declarations in the first.

It has been scientifically demonstrated that once a person publicly commits to a course of action or proclaims a belief, he is far less likely to change his position. The remedy then is to keep an open-mind and maintain a position of “non-commitment” as long as possible. Of course, as anybody in a long-standing romance where one partner refuses to commit to the relationship can attest, this strategy is not without risks but these can be minimized. In fact, the solution can be found by emulating the actions of the chameleon.

Again, it is not true that these creatures change in response to every external change—and neither should you. Rather, the key to survival is to contemplate which external factors are critical to your survival and change only in response to those. In the case of the chameleon, they change to regulate their temperature, hide from predators, or procreate. In other words, they commit to changing only when one of three criteria has been met: 1) their external environment has changed; 2) to avoid being killed; or 3) to survive and propagate as a species.

Their behavior worth mimicking. It is probably true that at some point everybody will “show their true colors” but it is also equally likely that every person’s true colors will change in response to external factors. The trick then is to avoid committing to a one-color policy in a multi-color world.

Interested in some other free “unlearning” lessons? Check out these older posts:
Lesson #24: Playing It Safe Is Risky