Beware of Unintended Consequences: Of Handshakes and Wolves

Posted in Generation RE, Humility, Unlearning 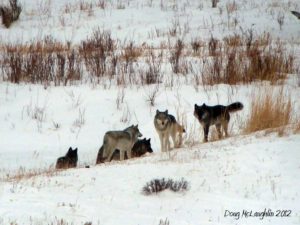 Dr. Fauci’s call for the elimination of the handshake and the removal of wolves from Yellowstone Park in the early part of the 20th century might seem wildly unrelated, but I’d suggest both represent the danger of unintended consequences.

In the late 1920’s, in an effort to prevent other animals from falling prey to wolves at Yellowstone Park, the National Park System instituted a systematic program to terminate wolves. On one level the policy makes perfect sense–get rid of the wolves, problem solved. Simple right?

Alas, the world is far more complex and interconnected than most people realize. After the wolves were eliminated, elk and deer populations proliferated. These animals then foraged on the roots of willows and aspens trees. This, in turn, caused river banks to collapse and, perhaps more importantly, beavers were deprived of the material from which to make up their homes. The beaver dams both mitigated floods as well as created ponds that provided a rich ecosystem for a complex web of life, including insects, birds, and other wildlife. When the wolf was eliminated, the entire ecosystem faced a higher danger of collapse.

Unfortunately, Dr. Fauci falls prey to the “curse of knowledge.” As one of the world’s leading epidemiologists his goal is to eradicate disease at all cost. From his perspective, anything that then furthers this goal is a net positive to society.

The problem is that he and other epidemiologists are not trained to consider the flip side of the equation–the net benefits of the handshake to society.

Humans, like natural ecosystems, exist in a complex web of interconnectedness. For many people handshakes are a simple but effective way of establishing a personal connection and affirming and building trust. They are also an important source of human contact and may play a modest role in addressing loneliness and improving happiness. Could some people’s mental health conditions worsen in a world of limited human contact? Perhaps, but that is not Dr. Fauci’s concern.

At a deeper level, America already suffers from a deep political divide. Could political polarization grow even wider in a world where the handshake is eliminated? It seems within the realm of possibility. But that, too, is not Dr. Fauci’s concern–even though political gridlock and partisan gamesmanship played a significant role in hampering America’s ability to effectively prevent the outbreak.

Stranger still, is it possible that the humble handshake might, in some counter-intuitive manner, strengthen a society’s immunity by introducing people to milder versions of the flu? Just the introduction of antibiotics is now threatening to make society more fragile by creating virulent strains of antibiotic-resistant bacteria, could the well-intentioned elimination of the handshake also make our complex, interconnected society more fragile in ways that we simply can’t appreciate or understand today? I don’t know, but I’d caution everyone to beware of simple answers to complex problems. The web of life is tightly woven and to pull on or eliminate even a small thread risks unraveling a wider world of problems. Let us proceed with caution and always beware of unintended consequences.

Jack Uldrich is a global futurist and the author of the award-winning book, Higher Unlearning: 39 Post-Requisite Lessons for Achieving a Successful Future.