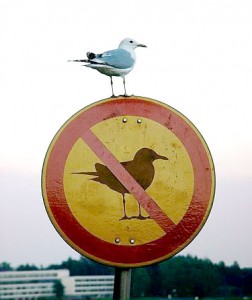 “Beware of false knowledge, it is more dangerous than ignorance.” –George Bernard Shaw

Question #24: Do more people die jaywalking or in the crosswalk?

The answer is the crosswalk. The reason is because people are lulled into a false sense of security due to the allure of existing rules such as painted crosswalks and flashing signs. As a result, they don’t feel as compelled to pay close attention to the actions of others. When jaywalking people are under no such illusion and remain vigilant and fleet-of-foot.

This lesson is appropriate in today’s business environment in two important ways. First, too many business leaders and organizations are lulled into complacency by tradition, existing rules and the power of the status quo. Like the white painted lines on a crosswalk, the protection their market position or brand offers is often non-existent. Worse yet, much as the flashing lights and warning signs provide a false level of security to a pedestrian, the signals customers send businesses also offer illusionary protection against an accelerating future. The problem is that by the time a person or organization realizes the danger they are in, it is too late and they are run over.

Clayton Christensen in his excellent and now classic book, The Innovator’s Dilemma, provides numerous examples of industry leaders refusing to heed the oncoming sounds of new threats because they were so attuned to the needs of their best customers—customers who were primarily focused on incremental product improvements.

This purportedly safe approach (i.e. “the customer is never wrong”) left them vulnerable to new competitors who were willing to ignore existing rules and opted instead to jaywalk in the direction of those “risky” fringe customers. Overtime, the niche markets serving these small communities mature and the product features or capabilities which were initially only demanded by those on the fringe come to be seen as valuable to mainstream audiences. Unfortunately, by the time this becomes evident to the existing players, it is too late and they ceded the marketplace to an upstart company. Think about how IBM was caught flat-footed by the personal computer in the 1980’s; large book retailers by the Internet in the 1990s; and the music industry by digitalization in the first decade of the 21st century.

Industries destined to feel a similar affect in the future include the energy, gaming and manufacturing industries. Advances in nanotechnology are fueling startling advances in solar and fuel cell technology. These technologies, many of which are now expensive and limited in capability, don’t appear to represent much of a threat today but as they improve they will create a vastly more decentralized energy distribution network and transform the energy paradigm. If existing leaders in the energy sector ignore these signs they will be run over. The same is true with how hand-gesture and 3-D technology will transform gaming culture, and advances in 3-D printing are poised to lead to radical new manufacturing and supply chain distribution models.

What then is a person or organization to do? Jaywalk. That’s right. Break the rules. Doing so will not only make you more aware alert to the dangers around you, you are also likely to chart a quicker path to future customers.

Remember unlearning isn’t risky. What is risky is playing it safe.

Homework assignment #24: Did you know that 80 percent of people over the age of 40 still believe yield signs are yellow and black. They aren’t. They are red and white and have been since—drum roll, please—1971. With this analogy in mind, identify at least one area where the rules in your business are changing and explain how a supposedly risky strategy might actually be safer.

One thought on “Unlearning Lesson #24: Playing it Safe is Risky”