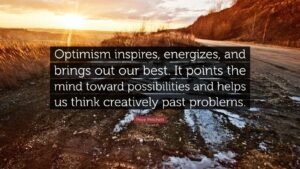 Think Optimistically: The organization, Reasons to be Cheerful, does an excellent job curating articles which highlight all of the positive change individuals, businesses and organizations are doing to create a better and more beautiful world. At years end, it highlights the top 180 reasons to be cheerful. Among my favorites: France is covering every large parking lot with solar panels. In doing so, the country will help generate the equivalent power of 10 nuclear power plants.

Think Harder: The past few weeks, I have mentioned ChatGPS’s progress in the field of artificial intelligence. The technology is now so good at answering questions and writing term papers that New York City has banned teachers and students from using it. The primary reason being that administrators are afraid it will hinder rather than help students develop critical thinking skills. (Editor’s note: I understand the rational behind this decision but it seems like a losing battle–similar to earlier battles over the use of calculators and the internet in schools. The more appropriate response should be helping student understand how to best leverage this powerful new tool.)

Think Cheaper: Often overlooked in a technology’s progress is the ability for some technologies to get both better and cheaper. To this end, lithium-ion batteries might soon have 4X the storage capacity of existing batteries at a fraction of today’s cost. The implications for renewable energy storage, electric vehicles, and e-bikes are immense.

Think Smarter: I am not the only person to make predictions for the coming year (my list can be accessed here). This article, The Biggest Tech Trends of 2023, is a compilation of 40 other technology experts.

Think Bigger: Did you know that e-bikes outsold electric vehicles by 2 to 1? In 2022, over 500,000 e-bikes were sold as compared to only 231,000 EV’s. To this end, the future of transpiration will not only be driven by self-driving and electric vehicles, it will also be heavily shaped by electric bicycles.

Afterthought: “Nothing is so firmly believed as that which a man knoweth least.“–Rene Montaigne