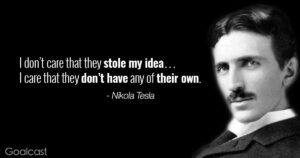 Think Wisely: The future requires wisdom and wisdom can come in many different forms and formats. I enjoyed this article on “The wisdom of the water tower.” I encourage anyone struggling with the on-going issue of “efficiency vs resilience” to give this short article a read–and then think about its implications for your business.

Think Big: Have you heard of the term “floatovoltaics”? If not, don’t worry neither had I. Nevertheless, if you are in the energy or utility industry, it is a term you may wish to familiarize yourself with. This article, Floating Solar Farms Are a Game Changer, can help.

Think Bigger: High cholesterol and heart attacks are major problems throughout the world. Will this always be the case? I don’t think so–and this article explains why. Major advances in gene-editing technology may soon offer a cure for one of our leading causes of death.

Think in Questions: Are indoor vertical farms really “future-proofing” agriculture. The answer isn’t clear-cut, but I’ll offer one figure that may shed some light on the issue. Between 2008-2015 the price of LED lights dropped by 94 percent. The price has continued to drop since that time and because vertical agriculture is heavily dependent upon LED lighting you can understand why vertical agriculture may grow into an increasingly powerful tool for feeding the world.

Think Different: It is unlikely vertical agriculture will ever grow certain grain crops such as corn, wheat and soybeans either effectively or efficiently. As such, these crops will remain vital for global food security for the foreseeable future. The problem is that severe droughts around the world are adversely affecting farmers’ ability to meet the world’s growing demand for the calories that come from these grain crops. One solution is gene-edited crops and the reality is that the drought in both Europe and China may force politicians and the public into accepting crops which have been been “manufactured” through gene editing technology.

Afterthought: “Always from the child’s hand the sword should be removed. I think every nation is an infant.” Saint Francis of Assisi.